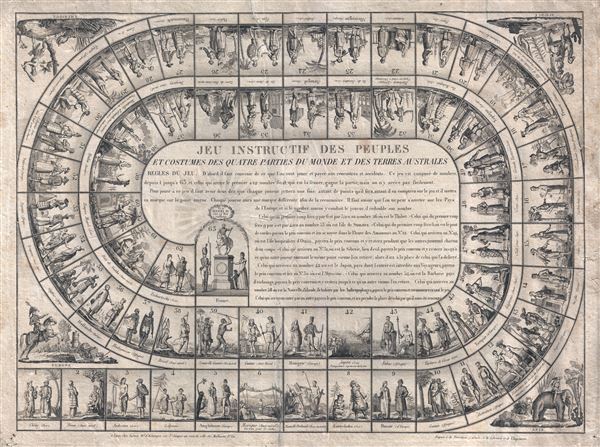 A scarce 1815 French geographically themed board game or jeux de l'oie (Game of Goose) produce by the French publishing house of Basset. In the spirit of snakes-and-ladders, the jeu de l'oie is a unicursal race game played with two dice and tokens. The present example consists of a voyage around the world, from China to France, in 63 squares, each representing different locations and cultures. The instructions for the game are located at the center of the spiral. Such games were popular in France in the 18th and early 19th centuries with some 19 known variants, including the present example.

The games follows the traditional spiral form of the jeux de l'oie as established in Italy during the late 16th century. Most such games consist of 63 squares, a system derived from Kabalistic teachings, arranged in a spiral. Most squares represent progress towards an ultimate destination at the center of the board, square 63. Some squares involve hazards, bonuses, or penalties. These are standardized across most such boards, though vary in content. In the present example the board has the standard notable squares,
As explained by game historian Adrian Seville,

Each game goes beyond simple cartographic representation to convey, through its rules or iconography, a deliberate 'message,' whether political, commercial or cultural. The games give insights into international relationships, perceptions and misconceptions at various points in the history of Europe. (Seville, A. The geographical Jeux de l'Oie of Europe, BELGEO, 2008 , 3-4)

The present map is no exception. European squares are generally presented as superior to non-European squares, which, as we have seen above, may involve being eaten or enslaved. The ultimate destination is France, which is represented by an illustration of Henri IV, certainly a curious choice given that Napoleon had just been defeated. Certainly the mapmaker does not want to associate himself with the Revolutionary era and is instead harkening back to the glory days of the monarchy, as represented by the much admired Henry IV. Basset was, it seems, a Restoraitonist, or at least wanted to distance himself from the debacle of Napoleon's defeat. The numbers squares and vignettes are, as follows:

Seville, A. The geographical Jeux de l'Oie of Europe, BELGEO, 2008 , 3-4
Looking for a high-resolution scan of this?