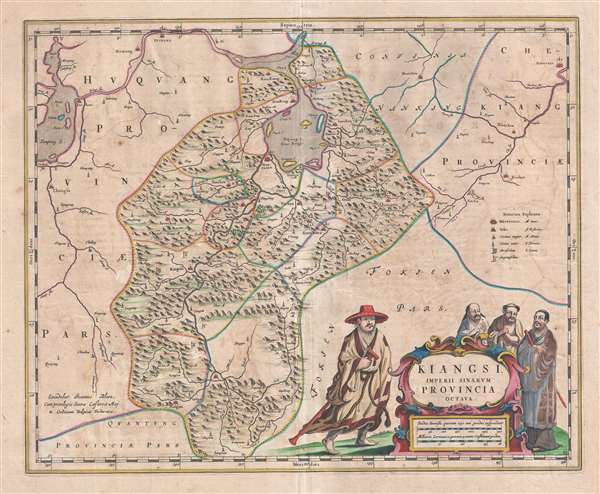 A map from the first Western atlas of China created by the 'first to study the history and geography of China with rigorous scientific objectivity.'

This is a 1655 Martino Martini and Joan Blaeu map of Jiangxi (Kiangsi) Province in China. The map depicts the region from the Yangtze River and Poyang Lake to Guangdong (Quantung) Province and from Hunan (Huquang) Province to Zhejiang (Chekiang) Province. Illustrated in detail, Jiangxi Province is divided into prefectures, with each prefecture including a capital city and several smaller settlements. Mountains are depicted in profile, along with trees and buildings. A key is located along the right border explaining the various notations. An elaborate title cartouche is situated in the lower right corner, surrounded by stereotypical depictions of Chinese men. Today Yunnan is admired for its exceptional natural beauty, interesting indigenous cultures, and remarkable gastronomic heritage.