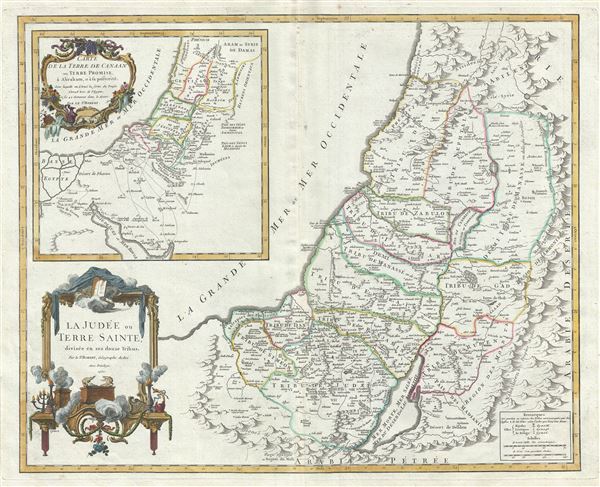 This is a beautiful 1750 map of Israel, Palestine or the Holy Land by Robert de Vaugondy. It extends from Sidon to Gaza and Covers the region as it existed in Biblical times with divisions for each of the Twelve Tribes of Israel. A large inset in the top left quadrant depicts the land of Canaan, or the Promised Land to Abraham, and his posterity, in which we track the course of the Israelites as they fled out of Egypt, across the Red Sea into Palestine, and 42 houses in the desert. .

The city of Ramesse is indicated as the starting point of the Biblical Exodus and the wandering of the Hebrews. We can follow their path into the desert and across the Red Sea following Moses' parting of the Red Sea. Now in the Sinai, we can follow the footsteps of the Hebrews to Mount Sinai (Mons Sinai) and their subsequent wanderings in the Sinai over the next forty years before migrating into the Promised Land by crossing the Jordan River just north of the Dead Sea. Forty two stations, each signifying a year of the Wandering, is noted throughout. Numerous Biblical sites are noted throughout.

Beautifully engraved title cartouches adorn the bottom left quadrant of the map and the top left quadrant of the inset. This map was drawn by Robert de Vaugondy in 1750 and published in the 1757 issue of his Atlas Universal. The Atlas Universal was one of the first atlases based upon actual surveys. Therefore, this map is highly accurate (for the period) and has most contemporary town names correct.

Rumsey 3353.002. Pedley, Mary Sponberg Belle et Utile: The Work of the Robert de Vaugondy Family of Mapmakers, 393.
Looking for a high-resolution scan of this?