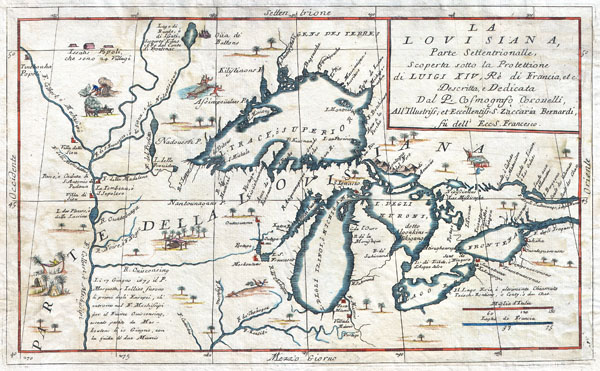 This exceedingly rare 1694 map by Vincenzo Coronelli is the most important depiction of the Great Lakes and the headwaters of the Mississippi River to appear in the late 17th century. Covers all five Great Lakes and extends westward as far as the Mississippi River valley. This map is a careful study of the Great Lakes Region and reveals Coronelli's fascination with this area. Coronelli derived his cartographic information from the reports of Jesuit Missionaries who were actively proselytizing in this region throughout the mid to late 18th century. These included the explorations of La Salle, Hennepin, Marquette and Jolliet, among others. Dotted with forts, Indian villages, and missionary stations. Shows the R. De Chekagou roughly where Chicago is today. Shows the Ottawa River route into Georgian Bay anda well developed mapping of Green Bay. This is also the most accurate early mapping of Lake Superior, in which both Keweenaw Peninsula (P. Kioanan) and Isle Royale (I. Miniong) are located. Features none of the mythical islands that appear in the Bellin map which appeared 100 years later. Decorated with numerous wonderful vignettes depicting the lives of American Indians. One in particular, a crocodile eating a man, is interesting and incongruous. This map is essentially an elaboration upon the 1688 Nolin/Coronelli map, 'Partie Occidentale du Canada ou de la Nouvelle France…' It was prepared for inclusion in the second edition of Coronelli's important 1695 Atlante Veneto.

Coronelli, Vincento. Atlante Veneto, 1695 2nd edition.     The Atlante Veneto was a Venetian cosmographic atlas issued by the Jesuit Minorite friar, geographer, and globe maker Vincenzo Maria Coronelli. The Atlante Veneto was a massive work consisting of some 13 volumes in four parts. The first section focused on a general introduction to geography and included notes a various geographic systems and globes. The second part consisted of world maps from various periods and in various styles, including double page maps of the continents and poles derived from his earlier globe work. The third part focused on hydrography and included nautically styled maps of important rivers, bays, oceans, lakes, and gulfs. The fourth and final section detailed exploration and describing noting various explorers and their discoveries. The whole consisted of some 191 engraved charts and maps as well as an assortment of views and decorative plates. The atlas was conceived as a continuation of Blaeu's Atlas Major and in many respects follows Blaeu cartographically. Many of the other maps are derived from Coronelli's own earlier globe work and exhibit various distinctly globe-like elements. Coronelli first issued the Atlante Veneto in 1691. A second edition was prepared and issued between 1695 and 1697. Most of the individual map plates remain identical between editions. The maps of the Atlante Veneto are universally admired for their exquisite engraving and high production quality, including fine paper and premium inks. All examples were issued uncolored and have typically been left as such by dealers and collectors.

Very good condition. Minor spotting here and there, else clean. Blank on verso.