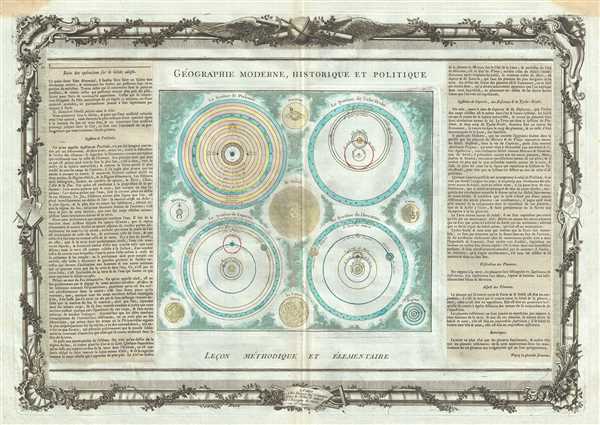 This is an interesting 1786 map by the French cartographer Louis Brion de la Tour depicting the theories of the Solar System by Ptolemy, Tycho Brahe, Copernicus and Descartes. The chart depicts four models, each consisting of the Sun, the planets and the moon. Outside the four spheres, the planets of Saturn, Jupiter, Mars, Mercury, Venus, the Moon, and the Sun are also beautifully detailed. Both the Ptolemaic and the Tychonic System consist of a stationery Earth, while the Copernican and Cartesian System place the Sun in the center.

To the left and right of the map are paste downs of French text with remarks and description of the map. Surrounding the whole is an elaborate decorative border featuring floral arrangements, surveying tools, elaborate baroque scalloping, and a winged globe. This map was issued as plate no. 5 in the most deluxe edition of Desnos’ 1786 Atlas General Methodique et Elementaire, Pour l’Etude de la Geographie et de l’Histoire Moderne.