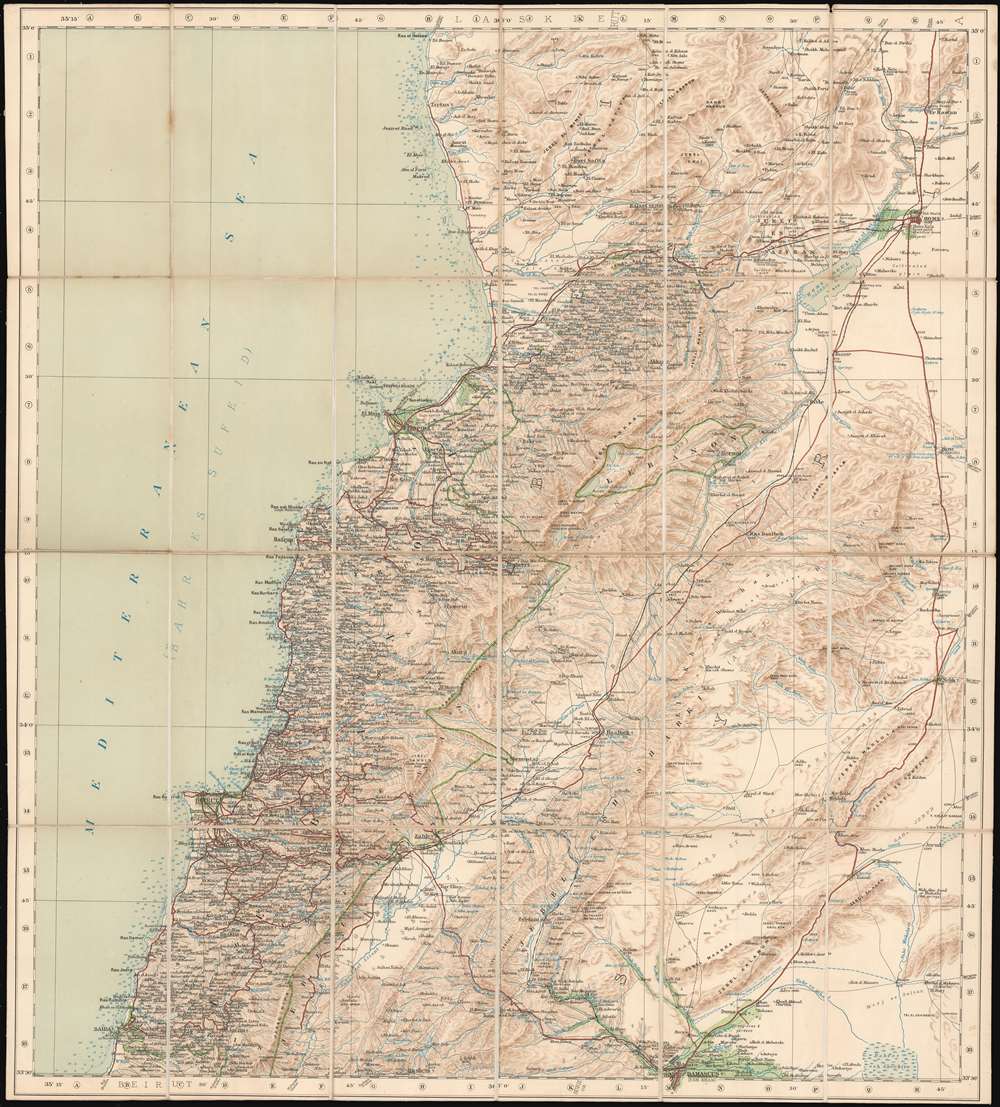 Scarce British Military Map of Lebanon and Syria, with the Bookplate of a Virtually Unknown Map Dealer.

This is a 1910 British War Office Map of central and northern Lebanon, and the surrounding parts of Syria. The area mapped extends from Sidon and Damascus in the south to Hosain Al Bahir in the north (Ras al Hassan on the map). The map spans from the Mediterranean Sea eastwards to Homs, Al Nabk, (Nebk) and Jayrud (Jerud). The map is meticulously detailed, showing the country's mountainous terrain with superb hachure, and with the heights of the higher peaks noted in feet. The map distinguishes between 'metalled' roads (levelled, and made of small pieces of stone,) roads passable by automobile, and mule track. Telegraph lines, telegraph offices, railways, and bridges are shown. Coastal areas include soundings, anchorages and lighthouses. Interior details include convents, mosques, ruins and ancient mounds, towers, and garden areas. Rivers, springs and wells, wetlands and even underground water channels are marked as well. The map's reference key is included on the verso, along with the scales.

In 1910, the entire area shown here fell within the Ottoman Turkish Empire, comprising parts of the Vilayets of Beirut and Damascus. The Sanjaks of Beirut, Tripoli, Hama and Damascus are represented here. The Mutasarrifate of Lebanon (made separate from Syria by the Ottoman Empire and an international commission in 1864, in order to prevent recurrence of the 1860 civil war) is outlined in green: winding east through the mountains from Sidon in the south to the crest of the Lebanon Mountains. The border roughly follows the mountains northwards before running back towards the Mediterranean, where Lebanon's territory nearly encloses, but does not absorb, Tripoli. A puzzling enclave of Lebanon appears in the Northern part of the Lebanon Mountains near Hermel (Hermil on the map.)

The map shows the narrow-gauge Beirut-Damascus railway, completed in August 1895; metalled roads and telegraph connect the two cities as well. The Aleppo Railway, a standard gauge line is shown running from Aleppo via Home, continuing to Baalbek and via the Beqaa Valley between the Mount Lebanon range and the Anti-Lebanon Mountains, meeting the Beirut-Damascus line at Riyaq. This north-south line began service to Aleppo in 1906. The junction at Riyaq included an engine repair works, and was a major terminal for the loading and unloading of cargo between the two unmatched railways.

The map is notable for recording evidence of ancient societies as well as the modern. At least seventeen separate ruins are noted, including Baalbek's temples and quarry. Groves of the famous cedars of Lebanon are marked on the map and shown pictorially.

The map's marbled papers bear the bookplate of Sifton, Praed and Company, Limited - The Map House - showing that firm's original 67 St. James's Street London address. The Map House is London's oldest specialist antiquarian map seller, whose customers included Ernest Shackleton, Winston Churchill, Edward VIII, as well as the British Library and the Library of Congress. They are rumored to occasionally still be active in the trade.

We have only seen catalogue listings for this specific example on the market where it changed hands between dealers at least twice. It was part of the Syria 1:250,000 topographical map series. (G.S.G.S. 2321) OCLC places the separate map in only the American University of Beirut and UCLA. The complete set can only be found in the National Library of Australia.

Very good condition. Dissected and mounted on linen for folding.