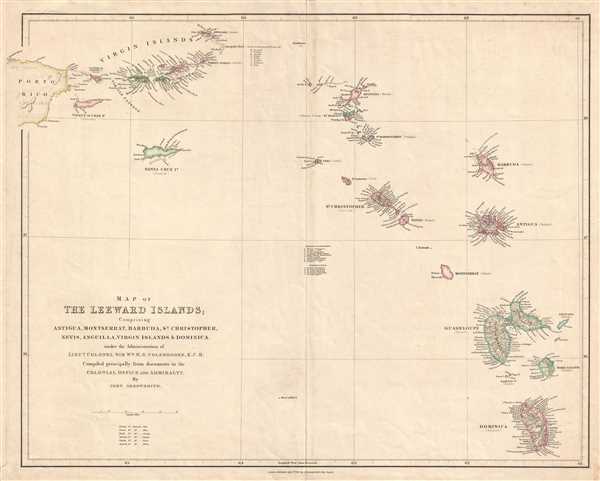 Clear and specific map of the Virgin Islands and the Leeward Islands.

Each island is illustrated in detail, with locations along each coast labeled. Distinctions between the colonial powers in control of each island are rendered through color. Thus, the different colors shading the various islands denote which colonial power possessed which island. In the Virgin Islands, for example, shading allows for instant realization that St. Thomas and St. John are owned by a different power (Denmark) than Tortola, Virgin Gorda, and Anegada (British). Locations throughout the Virgin Islands, including smaller islands too small to be colored, are labeled. For example, Anegada Reef, including White Horse and the Long Shoals, is labeled. A notation is included by Anegada Reef listing the number and nationality of vessels wrecked upon the reef since 1811, which numbered 67 in total.

This map was published by John Arrowsmith in 1842 for his London Atlas of Universal Geography. It replaced an earlier edition dating to 1839 and remained in editions of his atlas until at least 1844. Nonetheless, the map has become scarce today.