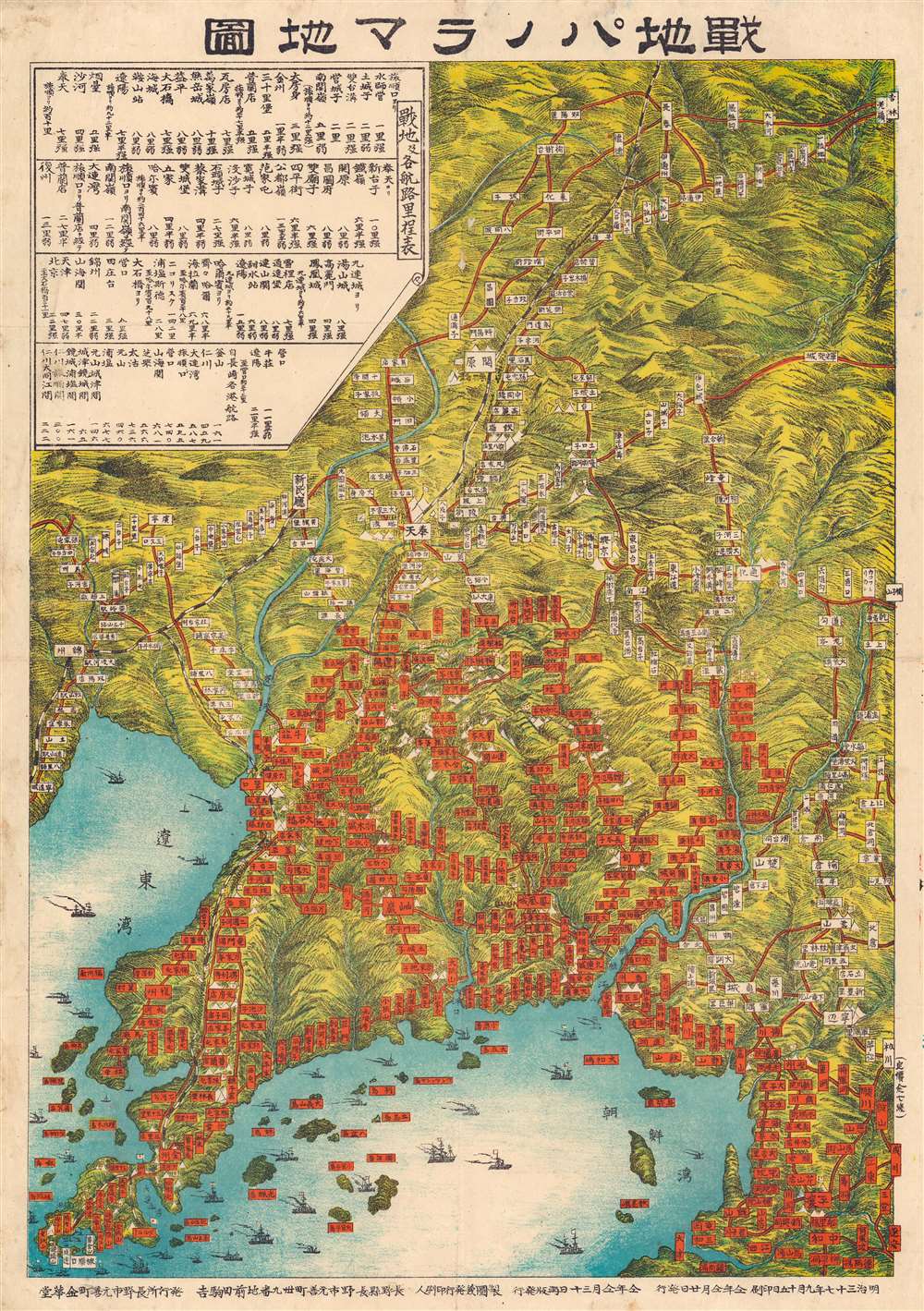 This is a rare Komakichi Maeda (前田駒吉) map of the Liaodong Peninsula (辽东半岛) and southern Manchuria, China. The map details Japanese and Russian troop positions around September 15, 1904, during the Russo-Japanese War (1904 - 1905). The table at the top-left provides the distance between cities (Port Arthur, Mukden, Liaoyang, etc.) and towns on or near the frontlines. Many of these names would have been familiar to the Japanese public, which was inundated with information about the war in newspapers and would therefore have been able to use this map as a visual aid to daily war progress updates. The table also gives the distance by sea from Nagasaki to strategic points in Korea and China. The distances are marked by the Japanese unit of measurement ri (里), which is much longer (about 2.44 miles) than the traditional Chinese li, which uses the same character. Although the map does not have a legend, aside from the positions of Japanese and Russian troops and ships as well as the names of cities and villages where they were stationed, it traces roads (red lines) and railways (black and white lines). Notably, it illustrates the route of the all-important China Eastern Railway, namely the southern section connecting Harbin (哈爾濱) to Mukden (or Fengtian 奉天), Dalian (金州) and Port Arthur (旅順口Lüshunkou), one of the main objectives of the war.

When this map was produced, Japanese troops had recently taken Liaoyang and the entire Liaodong Peninsula, except for the heavily fortified Russian outpost at Port Arthur at the extreme bottom-left, and were moving towards Mukden, near center. A series of inconclusive battles and the harsh winter slowed Japanese progress, but a full-scale attack on Mukden was launched in late February, resulting in perhaps the largest battle in history to that point, which ended with a quick Japanese victory and occupation of southern Manchuria.

There was initially some attempt at negotiation between the imperialist powers, but Tsar Nicholas II arrogantly believed it impossible that Japan could challenge a major European power. Japan proved him wrong, launching a surprise attack on the Russian Eastern Fleet stationed at Port Arthur. The Russians were unable to defeat the Japanese at sea and steadily lost ground on land, despite imposing heavy losses on the Japanese. The costs of the war and simmering discontent forced the Tsar to negotiate and U.S. President Theodore Roosevelt arbitrated a peace, confirmed by the Treaty of Portsmouth. The overwhelming victory of Imperial Japan came as a surprise to international observers, being the first major military victory in the modern era of an Asian power over a European power. The consequences transformed the balance of power and confirmed Japan as the pre-eminent power in East Asia.

In the late 1890s, Russia was constructing the Trans-Siberian Railway with the goal of connecting Moscow and Vladivostok. Lake Baikal, a 400-mile-long and 5,200-mile-deep lake in Siberia, presented a distinct challenge. Until a route around the lake could be built, all cargo shipped along the Trans-Siberian Railway had to be ferried across the lake and reloaded on trains. In 1896, China granted Russia a construction concession through Manchuria, creating a 'short-cut' from Siberia to Vladivostok. Construction began in 1897 and traffic officially began moving in November 1901. Russia also constructed a spur line from Harbin to Port Arthur, an ice-free deep-water port in the Yellow Sea. However, in 1904, the Russo-Japanese War ignited, and Russia lost possession of Port Arthur and the spur line south from Harbin to the Japanese. After the war, Chinese-Russian relations began to deteriorate, and the Chinese signed an alliance with Japan and the United States against the Russians after Russia pressed the Chinese for a 'monopoly of rights' in Manchuria. The Russian Civil War aggravated tensions between China and Russia and led to White Russian control of the Chinese Eastern Railway from 1917 until 1924. In 1924, after the Communist victory, China and the USSR agreed to jointly administer the Chinese Eastern Railway, but this led to the Sino-Soviet Conflict of 1929. The Japanese invaded Manchuria in 1931 and established Manchukuo. The Russians held on to the railway (then known as the North Manchuria Railway) until March 23, 1935, when they sold the rights to the Japanese through Manchukuo. In an incredible historical side note, the Japanese converted the railway to standard gauge in four hours on August 31, 1935. The USSR and China regained joint control of the railway in August 1945, and the Soviets transferred full control of the railway to the People's Republic of China in 1952.

This map was produced by Kinkado Bookstore (金華堂書店), a publisher based in Nagano since the early Meiji period, on September 15, 1904, distributed on September 20, and reprinted in a second edition (再版) on September 30, probably to reflect changes in the battlefront situation. We note an example at Stanford. Scarce to the market.

Maeda Komakichi (前田駒吉; c. 1900 - 1949) was a Japanese cartographer based in Nagano who mostly produced maps of his hometown, generally published by Kinkado (金華堂書店). Learn More...

Good condition. Some verso reinforcement where paper is thinning. Fold lines exhibit exhibits wear but are overall in good condition. Repairs evident that precede acquisition.
Looking for a high-resolution scan of this?