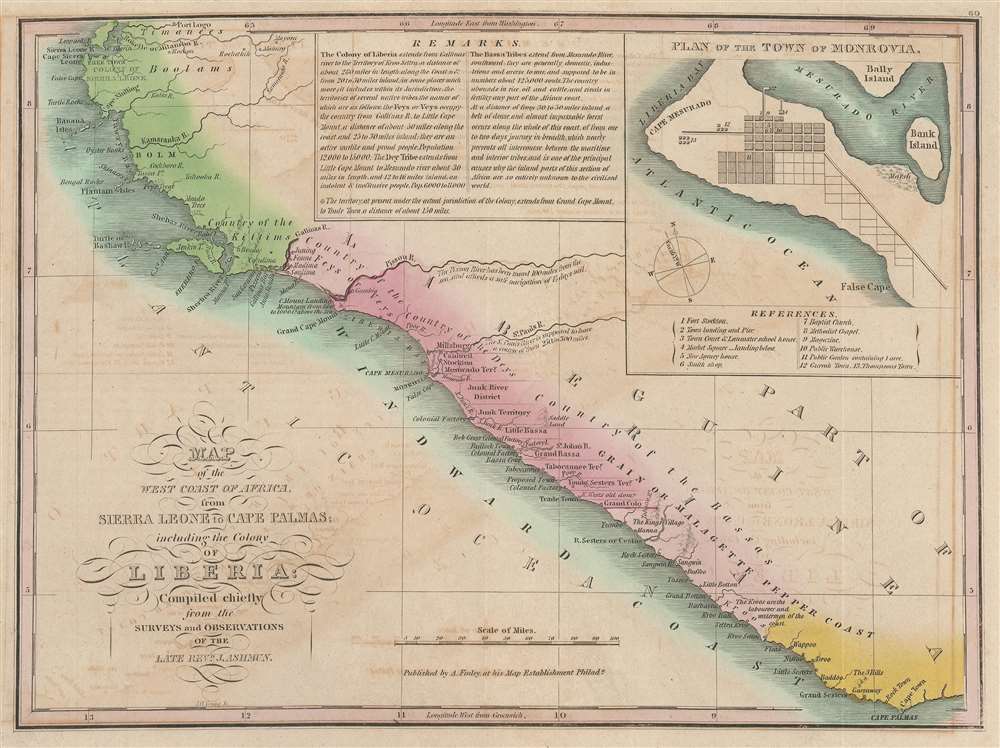 The first and most important map of the colony of Liberia.

The most important early map of Liberia issued shortly after its founding. This map was published in 1830 by Anthony Finley based upon the cartography of Jehudi Ashmun. The map covers the west African coast from Freetown, Sierra Leone, to Cape Palmas. Light red shading indicates territory claimed as Liberia by the American Colonization Society (ACS), while the darker red strip, about 150 miles, indicates regions actually under ACS control. The map is derived by cartography produced by Jehudi Ashmun, an agent of the U.S. Government and the ACS who traveled extensively throughout the region in an attempt to acquire lands and organize peaceful relations with the generally unwelcoming established tribal kingdoms.

We find it interesting that one the founders of the ACS was named Robert Finley (1772 - 1815), a clergyman of Scottish descent based in Princeton, New Jersey, and that this map was published by Anthony Finley of Philadelphia. Both Finleys' fathers were named James Finley, and they lived reasonably close to one another (New Jersey and Philadelphia). Although there is no clear relationship between Anthony Finley (1784 - 1836), Philadelphia publisher of the earliest map of Liberia, and Robert Finely, founder of the ACS, the matter may merit further research.

This map was issued in 1830 - 31. It was published by Anthony Finley and engraved by J. H. Young. Finley introduced this map as a separate map in 1830, dated; and as here, undated with the 1831 edition of his New General Atlas. The 1830 dated edition may have been issued for the ACS Thirteenth Annual Report of 1830. In the 1831 edition of his New General Atlas, Finley added two additional maps, Florida (plate 31) and this map of Liberia (plate 60).


Anthony Finley (August 25, 1784 - June 9, 1836) was an American book and map publisher based in Philadelphia, Pennsylvania. Finley was born in Philadelphia in 1874. He opened a bookshop and publishing house at the Northeast corner of Fourth and Chestnut Street, Philadelphia in 1809. His earliest known catalog, listing botanical, medical and other scientific works, appeared in 1811. His first maps, engraved for Daniel Edward Clarke’s Travels in Various Countries of Europe, Asia, and Africa also appear in 1811. His first atlas, the Atlas Classica, was published in 1818. He soon thereafter published the more significant A New American Atlas and the New General Atlas…, both going through several editions from 1824 to 1834. Although most of Finley's cartographic material was borrowed from European sources, his atlases were much admired and favorably reviewed. In addition to his work as a printer, Finley ran unsuccessfully on the 1818 Democratic ticket for Philadelphia Common Council. He was a founding officer of the Philadelphia Apprentices’ Library, and a member of both the American Sunday-School Union and the Franklin Institute. He was also an ardent supporter of the American Colonization Society, an organization dedication to returning free people of color to Africa - which led to the founding of Liberia. Much of his wealth was dedicated to supporting this cause. Finley was active as a publisher until his 1836 death, apparently of a 'lingering illness.' Shortly thereafter advertisements began appearing for his map business and plates, most of which were acquired by Samuel Augustus Mitchell. Learn More...

Very good. Some toning and offsetting.