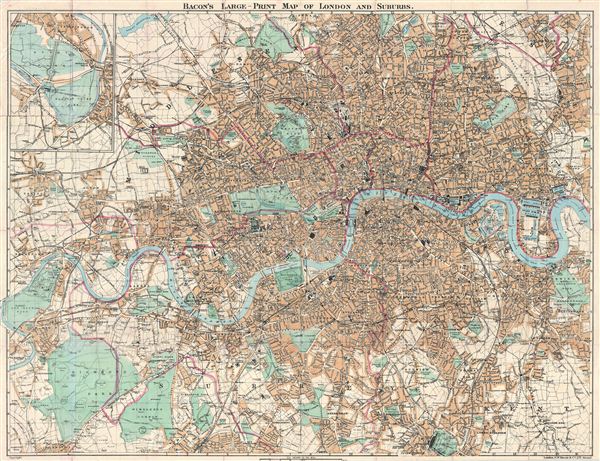 An uncommon 1882 map of London and its immediate suburbs by G. W. Bacon. Centered on the Thames River, the map covers from Old dear Park to Greenwich Park and the east India Dock, as well as from Hampstead Heath in the north to the Crystal Palace in the south. An inset in the upper left quadrant details Bushy Park and Hampton Court Park. The map names all streets, parks, important buildings and neighborhoods.

George Washington Bacon (1830 - 1922) was a London based book and map publisher active in the mid to late 19th century. Bacon's firm G.W. Bacon and Co. purchased the plates created by Edward Weller for the Weekly Dispatch Atlas then modified and updated them for several of their own important atlases, including The New Ordnance Atlas of the British Isles. In 1893, Bacon & Co. acquired the map publishing business of J. Wyld. Then, around the turn of the century, Bacon & Co. itself was folded into the Scottish publishing house of W.& A.K. Johnston.

Good. Backed with archival tissue for stability. Some wear on original fold lines.