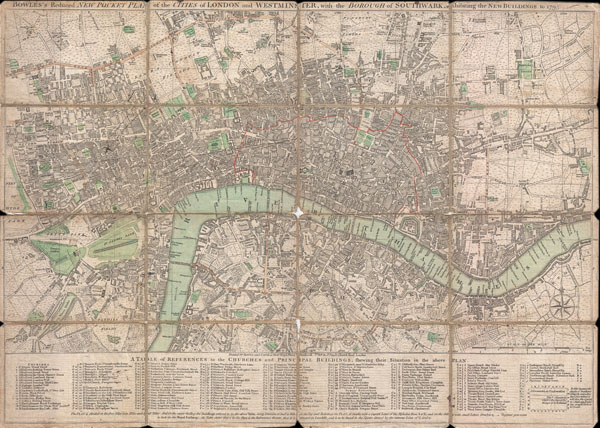 This is a rare 1795 folding pocket map or street plan of London, England by Carrington Bowles. Covers London on both sides of the Thames River from Hyde Park in the west to White Horse Street in the East and from Lambeth in the south to Islington in the North. Offers superb detail throughout often noting individual buildings, gardens, and estates. Table along the bottom notes principle buildings and churches. Bowles first issued this plan in 1777 and updated it regularly to the end of the 18th century. This edition of the map was issued shortly after Bowles's death by his firm, Bowles and Carver, from their offices at No. 69 St. Paul's Church Yard, London.

Good condition. Dissected into 16 sections and mounted on linen. Original linen backing exhibits considerable wear and is splitting in places. In some places, particularly at the fold intersections at the center of the map, there is minor loss - see image. Else a very nice example.