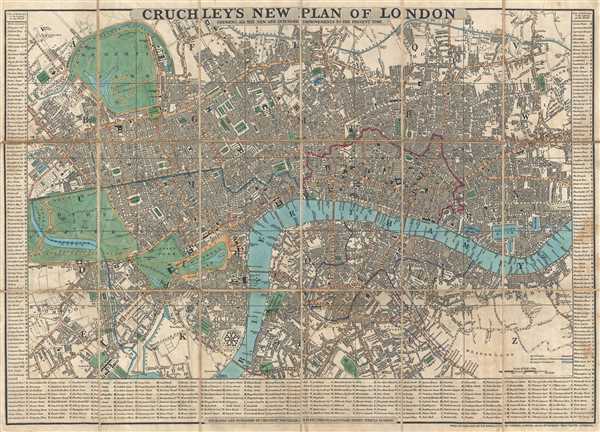 An example of an early edition of one of the most celebrated maps of London.
$950.00

This is an 1834 edition of George Frederick Cruchley's famous city map or plan of London, England. The map depicts the city from Hyde Park to the London Docks and from Regent's Park and the Regents Canal to Kennington and Walworth. Highly detailed, myriad streets and other locations are labeled throughout London. Buckingham Palace, St. James's Palace, the Houses of Parliament, Westminster Abbey, and the Tower of London are among the sites specifically identified. The detail even extends to labeling locations within the city parks. The City of London, the City and Liberties of Westminster, and the Borough of Southwark are differentiated through the use of thick colored lines overlaid on the map. Bordered by a street index, each street is listed with a letter, which corresponds to a letter on the map's grid.

The early 19th century was a period of extraordinary growth for London as the industrial revolution motivated thousands to relocate to the teaming metropolis. The wealth generated by a global empire combined with a population explosion led to greater demand for a modern urban infrastructure. Cruchley aptly names this his 'New Plan of London' and takes pains to note that it shows all 'new and intended improvements.' From railways and canals, to new bridges, and advances in sewage systems, Cruchley's London was transforming into a modern global megapolis.

Cruchley first issued this map in 1827, with more than 18 subsequent editions, most of which included significant updates throughout. The present example is the 7th edition.

Howgego No. 307.
Looking for a high-resolution scan of this?