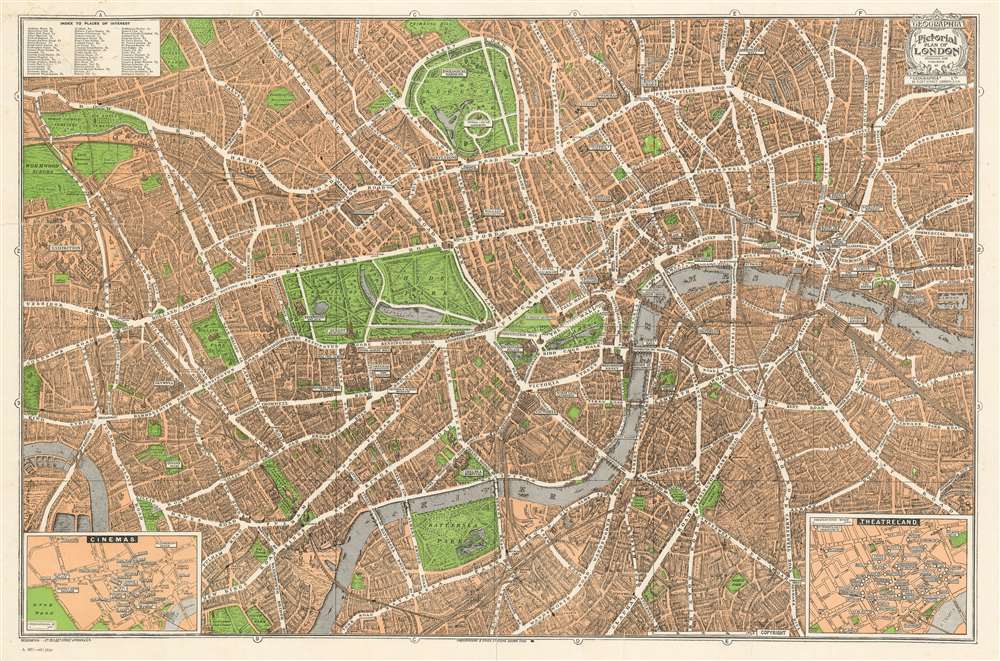 This is a wonderful plan or pocket map of London published in August of 1932 by Geographia Ltd. It covers downtown London from the Hammersmith Bridge and Wormwood scrubs eastward past Hyde Park and Buckingham Place to Whitechapel Road and the London Docks. Unlike most English city plans of the period, this map replicates the pictorial style which popular in Paris during the early part of the 20th century.

The map features many of the buildings of London drawn in three dimensions. Gardens and parks are beautifully rendered in green with illustrations of ships sailing in the Thames River. Bridges, museums, cathedrals etc. are also identified. Insets in the lower right and lower left depict Theaterland and Cinemas, respectively. Both insets detail individual establishments as they existed at the time including the Regal, Marblearch Pavilion, The Palladium, the Hippodrome Theater and the Coliseum Theater, among many others. Notes stations on the London Underground. An index in the top left quadrant notes several places of interest.

This map was first published in the 1920s from the 33 Fleet Street address. In early editions of the map, the 'Cinema' inset in the lower left instead represented 'Clubland', naming some 87 private gentleman's clubs. In an attempt to reach a wider, more modern audience, 'Clubland' was replaced with 'Cinemas' in the 1930s, reflecting also changing interests. Most examples, like the present, feature a peculiar coded dating system in the lower left, below the bottom border (see cartographer bio below). Published in London at 55 Fleet Street, London by Geographia Ltd.