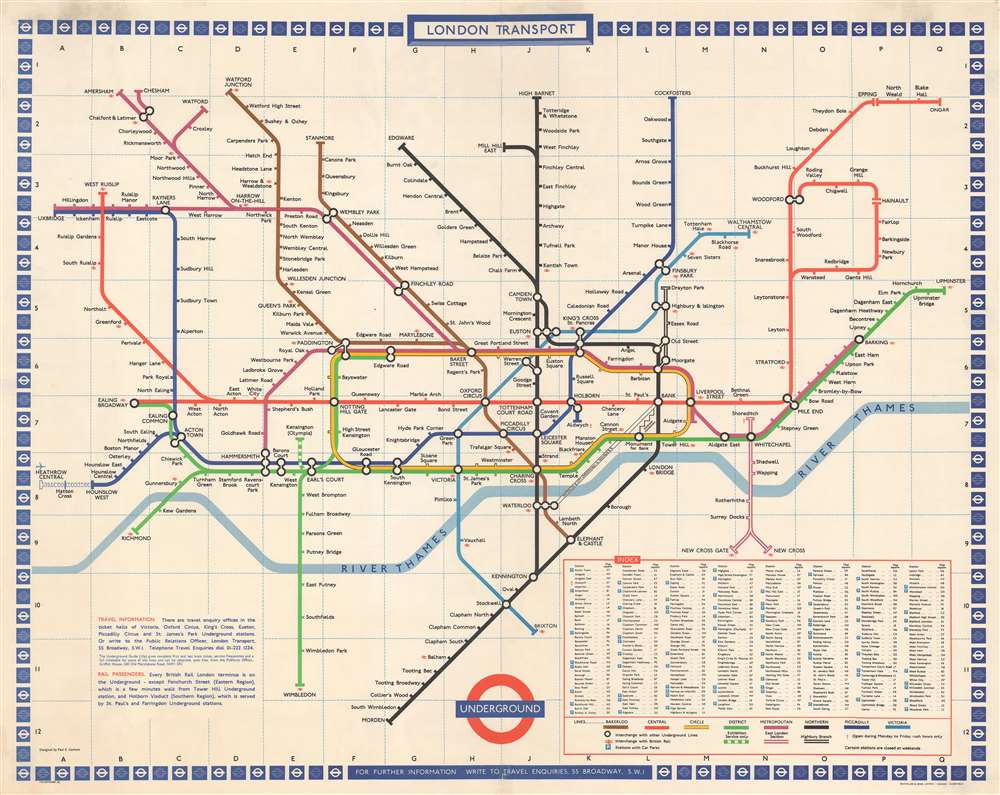 A c. 1972 large format map of the London Underground as drawn by Paul E. Garbutt made for in-station display. This map, or rather schematic transport diagram, is drawn on the c. 1930s Harry Beck model. In 1960, when the Victoria Line was introduced, the classic Beck map had to be redrawn. The job fell to publicity artist Harold Hutchison, who redesigned the Beck map, replacing Beck's curves with unpopular angles and square interchanges. The map was so unpopular, that in 1962 London Transit worker Paul E. Garbutt, again redesigned it, returning to the Beck style, but retaining some of Huchinson's ideas, including black rings for interchanges and lower-case text for non-interchange stations. Around this time Garbutt also introduced the distinctive bottle shape of the Circle Line which, years later, Absolute Vodka was able to leverage for some clever advertising. This version of the underground map was prepared in 1972 and includes plans to extend the Piccadilly Line to Hattan Cross and Heathrow Airport, a project that was not completed until 1977.

This map was designed by Paul. E. Garbutt and issued by Waterlow and Sons in 1972. While vintage Underground maps are not uncommon, large format station display maps, like the present example, are rare on the market.

Paul E. Garbutt (1919 - 2008) was an English railroad man and transit worker active in the middle part of the 20th century. Garbutt was born in Westcliff-on-Sea. After graduating from school in 1934, he took work with the London, Scotland, and Midland Railway. After World War II, he transitioned to the London Underground. Garbutt is credited with redesigning the London Underground map in 1962 to conform stylistically to the conventions established by Harry Beck in 1931. He can also be credited with the distinctive bottle shape of the Circle Line. Learn More...


Waterlow and Sons (1810 - 1961) was a British engraving and printing concern active in London specializing in currency, postage stamps, bond certificates, and occasionally maps. The firm was founded by James Waterlow (1790 - 1876) in 1810 on Birchin Lane, London, as a legal document printer and copyist. By 1852, they had expanded into stamps and his sons, Albert, Alfred, Sydney, and Walter joined the business. One year after James Waterlow's death, in 1877, infighting among the sons led Alfred Waterlow to split off, forming Waterlow Brothers and Layton. The rift was settled by 1920, and the two firms once again merged under the Waterlow and Sons imprint. They were involved in the Portuguese Bank Note Affair of 1925, wherein the Portuguese fraudster Artur Virgílio Alves Reis convinced the firm to print 200,000 banknotes of 500 Portuguese Escudos each, amounting to roughly 88% of Portugal's GDP. The affair was settled in court with a ruling against Waterlow. In 1928, Waterlow lost its most lucrative contract, printing English banknotes, and began to fall into decline. In 1961, they were acquired by Purnell and Sons who, shortly afterwards, sold the firm to De La Rue. Ironically, De La Rue acquired the contract to print Bank of England banknotes again in 2003 – 75 years after Waterlow lost it! Learn More...

Good. Some toning. A few minor verso reinforcements. Some creasing from folding.
Looking for a high-resolution scan of this?