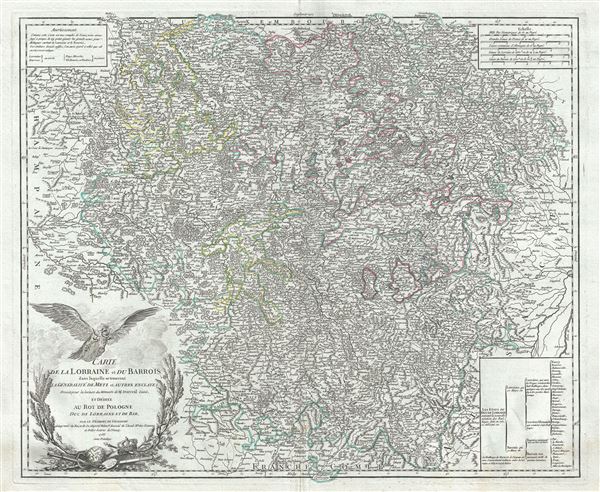 This is a beautiful 1756 map of the French wine making region of Lorraine by Robert de Vaugondy. It covers the north east portion of France along with parts of neighboring Germany from Stenay south to Bourbonne-les-Bains and from Saint-Dizier east as far as Strasbourg. The map renders the entire region in extraordinary detail offering both topographical and political information with cities, mountains and forests beautifully rendered in profile. It includes the whole or parts of the French departments of Vosges, Meurthe, Meuse, Moselle and Bas Rhin of the Alsace region.

The map includes a beautifully engraved title cartouche in the lower left quadrant. This map was drawn by Robert de Vaugondy in 1756 and published in the 1757 issue of his Atlas Universal.

Rumsey 3353.033. Pedley, Mary Sponberg Belle et Utile: The Work of the Robert de Vaugondy Family of Mapmakers, 129, state 2.
Looking for a high-resolution scan of this?