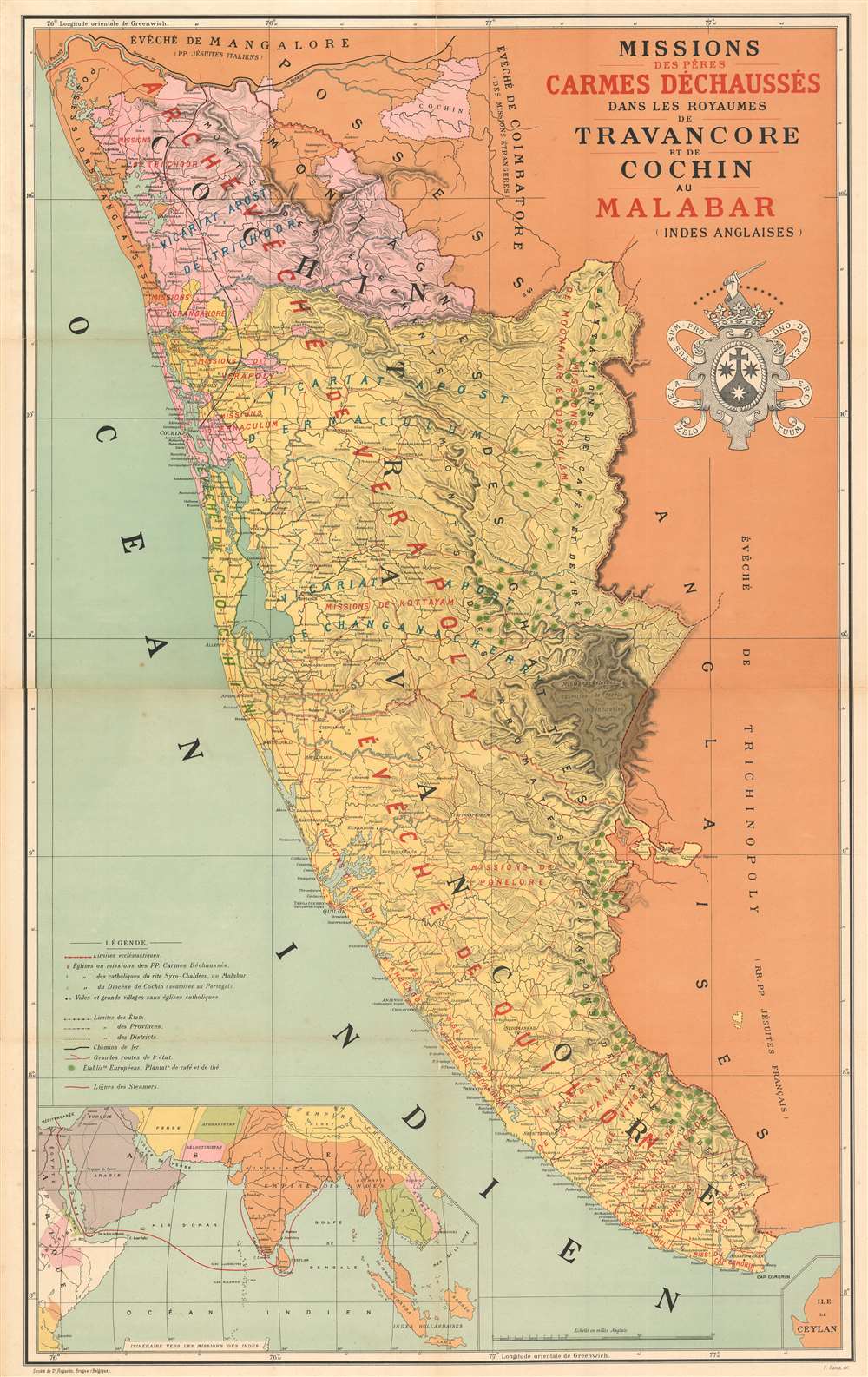 The 'Barefoot Fathers' on the Malabar Coast.

A remarkable and extremely rare 1892 chromolithograph map of the Malabar Coast, including Travancore and Cochin, India, illustrating the missions of the Discalced 'barefoot' Carmelite Fathers. Coverage extends from the Periyar River (Ponay River) to the southernmost tip of India, and from the Malabar Coast inland roughly to the modern-day borders of Tamil Nadu. This is a large-scale map presenting this region in impressive detail, illustrating not only mission activity, but detailed topography, infrastructure, river systems, European owned plantations, and more. The territories of the Kingdoms of Travancore and Cochin are marked as zones of influence of the Carmelite Archdiocese of Verrapoly, Dioceses of Quilon and Cochin, Apostolic Vicariate of Trichoor, Vicariat of Changanacherry, and numerous missions. Towns are distinguished as being under the influence of the Carmelites, the Syro-Chaldéen Rite, or the Portuguese Diocese of Cochin. A large heraldic shield, the arms of the Carmelite Order, appears in the upper right, with the motto Zelo zelatus sum pro Domino Deo exercituum.

The Barefoot Carmelites in Malabar

The Discalced Carmelites came to India in the early 1600s. Their first mission was established at Tatta in Sind, now Pakistan, followed by a second in 1620 in Goa. Carmelites missions extended to throughout the Mughal Empire, as well as to Goa, Surat, Bijapur, Bombay, and Karwar. A 1656 dispute between the St. Thomas Christians and their Jesuit Archbishop of Cranganore led Pope Alexander VII to send two separate groups of Discalced Carmelites to Malabar in a temporary peace mission. The temporary mission became permanent and had significant influence on the development of Christianity in the region, especially in the pastoral care of the faithful, reunion movement, evangelization of non-Christians, formation of native clergy, founding of the native religious congregations, and socio-educational activities. Curiously, a brown shaded region in the Western Ghats southeast of the Peermade Hill Station has no missions and is identified as 'Montagnes élevées couverts de forêts impénétrables.' In 1901, Carmelite presence in the region cemented with the establishment of a monastery at Thiruvananthapuram. It may have been this event that led to the lavish publication of the present map.

This map was drawn, engraved, and printed in Bruges, Belgium by Pieter Raoux for the Société de St. Augustin, an ecclesiastical printing house, which he managed. Examples are rare. We are aware of only one other known example.

Pierre / Pieter Raoux (September 8, 1845 - October 3, 1917) was a Belgian graphic artist, engraver, printer, and lithographer active in Bruges from roughly 1879 to 1889. Raoux ws the eldest son of Francisca Lagast - at the time unmarried. When she married the carpenter Edmond Raoux in 1850, Pieter was legitimized. His family was nonetheless mired in poverty and Pieter was consigned to the care of the Broeders van Liefde (Brothers of Charity) at Katelijnestraat. Raoux studied art at the Brugse Academie and was later trained as a lithographer under Jacques Petyt (1822 - 1871). Roaux took over management of the Petyt studio, along with his widow, and ran it until 1874. Around this time he received a state grant to study the new printing technique of chromolithography in Paris. He received a subsequent private grant from Jean-Baptiste Bethune and printer-publisher Henri Desclée to study painting in Italy. Their intention was for him to take over the Saint Augustin printing house in Bruges. Although this project ultimately led to fruition, Raoux had a disagreement with Bethune and Desclée and started his own business in 1879. In 1889, he closed his printing studio and took over management of St. Augustin, as was intended. In this position most of his work was done on behalf of ecclesiastical orders, but included religious cards, memorials, blessings, and at least one map. His offices were at Noordzandstraat 85. Learn More...