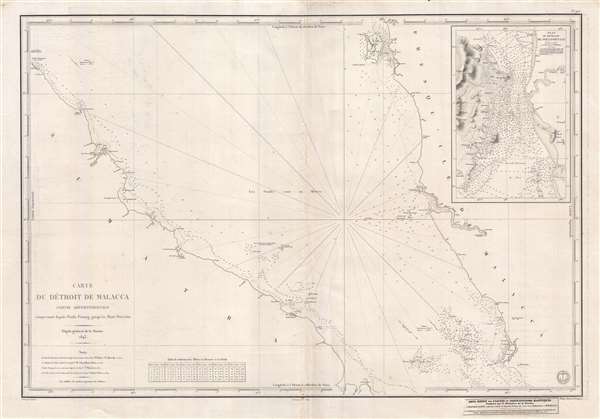 Scarce French mapping of Penang and the Malacca Strait.

An uncommon 1843 first edition French chart of the Strait of Malacca with an inset of the island of Penang in the vicinity of George Town. The chart covers the Strait of Malacca and the Malaysian coastline from Pulau Penang (Poulo Penang) to the Klang River (Rio Colong) and the vicinity of modern day Kuala Lumpur. The map is primarily derived from British sources, including surveys of the Sumatran coastline conducted by W. Rose and R. Moresby in 1822, of the Strait of Calam by W. Fitzwilliam Owen in 1817, of Penang (including the inset) by T. Woore in 1832, and of the Arroa Islands (Aruah) by Daniel Ross in 1819.

Dépôt des Cartes et Plans de la Marine (fl. 1720 - present), often called the Depot de Marine, was a French hydrographic mapping organization founded in 1720 under Charles-Hercule of Albert de Luynes (674-1734). Much like the U.S. Coast Survey, the British Admiralty, and the Spanish Deposito Hydrografico, the Depot was initiated as a storehouse and distribution center of existing nautical and marine charts. Eventually the depot initiated its own mapping activities in an attempt to improve and expand upon existing material. Some of the more prominent cartographers and hydrographers associated with the of Dépôt des Cartes were, Philippe Buache, Jacques-Nicholas Bellin, Giovanni Rizzi-Zannoni, Rigobert Bonne, and Jean Nicolas Buache.


Stanislas Joseph Jacobs (18?? – July 5, 1867) was a French line engraver active in Paris during the middle part of the 19th century. Jacobs did work for the both the Dépôt de la Guerre ad Dépôt de la Guerre and the Dépôt des Cartes et Plans de la Marine. He often worked with Jacques-Marie Hacq. His most important publication is most likely the Eugène Duflot de Mofras map of the American west, published in 1844. Stanislas was a member of the French Société de Géographie from 1842. In 1862 Stanislas' son, Alfred Joseph Jacobs (December 15, 1827 - July 16, 1889), also an engraver, descended into mental illness in 1862 and was consigned the Charenton hospice. The illness of his son apparently catapulted Stanislas into a deep unremitting despair. Stanislas retired in 1862. He married to Thérèse Alexandrine Outrequin (January 28, 1804 – February 20, 1873). He lived in Paris at Rue De Condé, 1.


Jacques-Marie Hacq (September 22, 1785 – 18??) was a French letter and line engraver, and historian, active in Paris during the middle part of the19th century. Hacq was born in Paris and trained under J. P. Besançon, who he succeeded at the Dépôt de la Guerre in 1830. He engraved for the Dépôt de la Guerre as early as 1830 and for the Dépôt des Cartes et Plans de la Marine from, at least, 1840 to 1852. In addition to his work for the French Government, he also completed maps engravings for Lesage, Lapie, Dufour, Duperrez, Gouvion St. Cyr, and Dumont d'Urville. His historical works include a history of the Napoleonic Wars and a history of Paris under the reign of Louis XIII. During most of his career in paris he lived at 58 Rue de la Harpe.