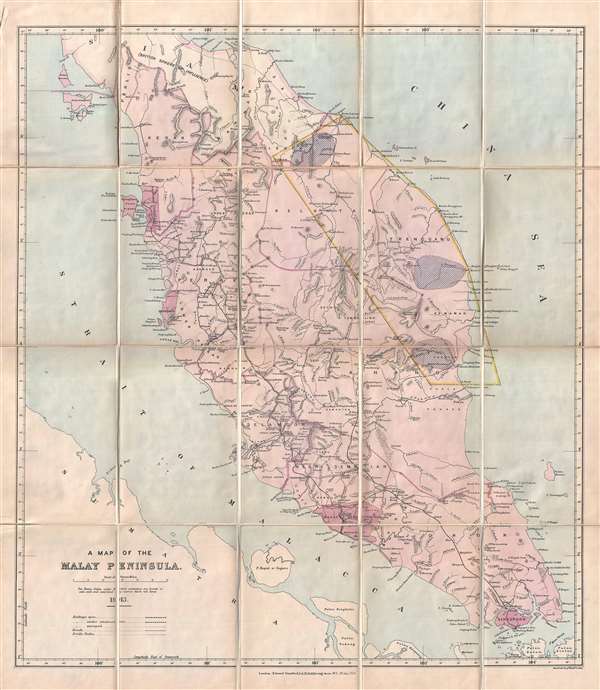 Rare map of Malaysia with manuscript highlighting of the Eastern Tin Belt.
$1,250.00

A scarce 1913 map of the Malay Peninsula (Malaysia) by Edward Stanford with curious manuscript annotations associated with tin mining. The map covers from the Thai Border south to include Singapore, Georgetown (Pulau Pinang), Wellesley (Seberang Perai), Dindings (Manjung), Malacca, and Singapore are highlighted in darker red. The map further identifies roads, rail lines, rubber plantations, riverways, geographical features, indigenous villages, and more. An area at the right of the map is outlined in manuscript yellow.

The manuscript work on this map is so masterfully incorporated that we did not, at first, realize we were looking at a hand drawn addition. The yellow boxed area in Eastern Malaysia, comprising Trenganu, Kemaman, Kuantan, parts of Kelantan and Legeh, is a manuscript addition to the map. As are the three roughly oval purple zones in Legeh, Trengganu, and Kuantan. At first the purpose behind these annotations confused us, but we eventually came to realize that the boxed area roughly corresponds to the Eastern Tin Zone. Tin mining, which began under the British in the Federated Malay States and the Unfederated Malays States during the 1890s became, by the early 20th century, a major regional industry. The highlighted areas reference the richest regional deposits of din, including the Sungai Lembing mines in Kuantan (and the short rail line constructed to serve them), once considered the 'El Dorado of the East' and one of the world's deepest and (at the time) richest tin deposits.

This map was issued in 1913 by Edward Stanford's Geographical Establishment from their offices as 12, 13, and 14 Long Acre, London.