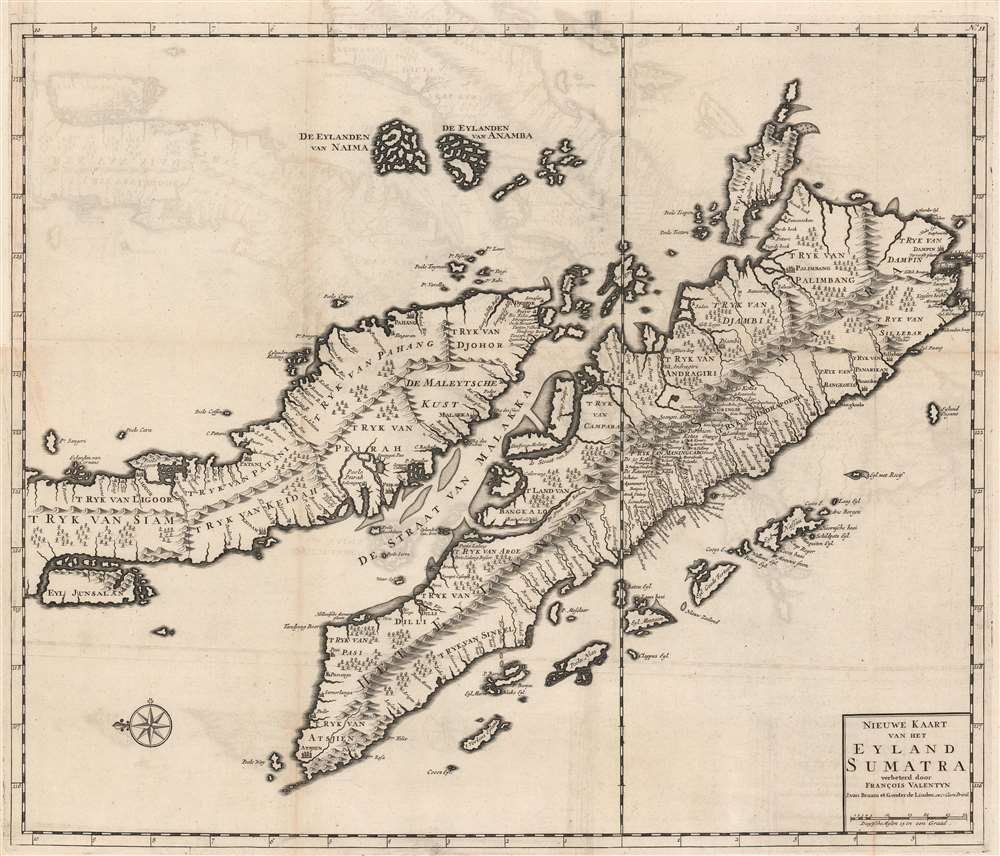 This is a handsome example of Francois Valentijn's 1726 map of Malaya (Malaysia and Singapore) and Sumatra. It is significant as the first map to significantly detail the interior, as well as the indigenous policies of Malaya. The publication is based upon Valentijn's first-hand experience and emerged just as the VOC was beginning to loosen its stranglehold on cartographic knowledge of the East Indies.

Oriented to the east, Valentijn's map covers from the Island of Junsalan (Penang / Prince of Wales Island / Pulu Pinang) south as far as the Straits of Sunda and west to Atsjien (Banda Aceh) at the western tip of Sumatra. It extends eastwards to the Anambas Islands and the Bangka-Belitung Islands. The cartographer identifies various polities as well as numerous coastal settlements and cities. Topography is rendered in profile and limited submarine detail is presented in the Strait of Malacca.

Valentijn's map is the first published to present a sophisticated treatment of Malaya and Sumatra, and the model upon which most subsequent maps were based through the late 18th century. This is one of the earliest maps to expound upon the indigenous polities of Malaya. Valentijn identifies seven separate kingdoms within the peninsula. The presentation thus represents a major change in Malayan politics following the 1606 Dutch capture of Portuguese Malacca. The Dutch forged a peaceful arrangement with the Sultan of Johor, leading to a time of general peace and prosperity. This prosperity, combined with the decline of the Sunnite of Aceh in northern Sumatra, allowed for the rapid development and expansion of smaller polities throughout the peninsula. These include Johor, Perak, Pahang, Patani, Kedah, and Ligor - the latter two of which, as noted on the map, fell under the sway of Siam. Valentijn moreover, has recorded some eighty place names in Malaya alone, and far more in Sumatra, exceeding in detail any predecessor map.