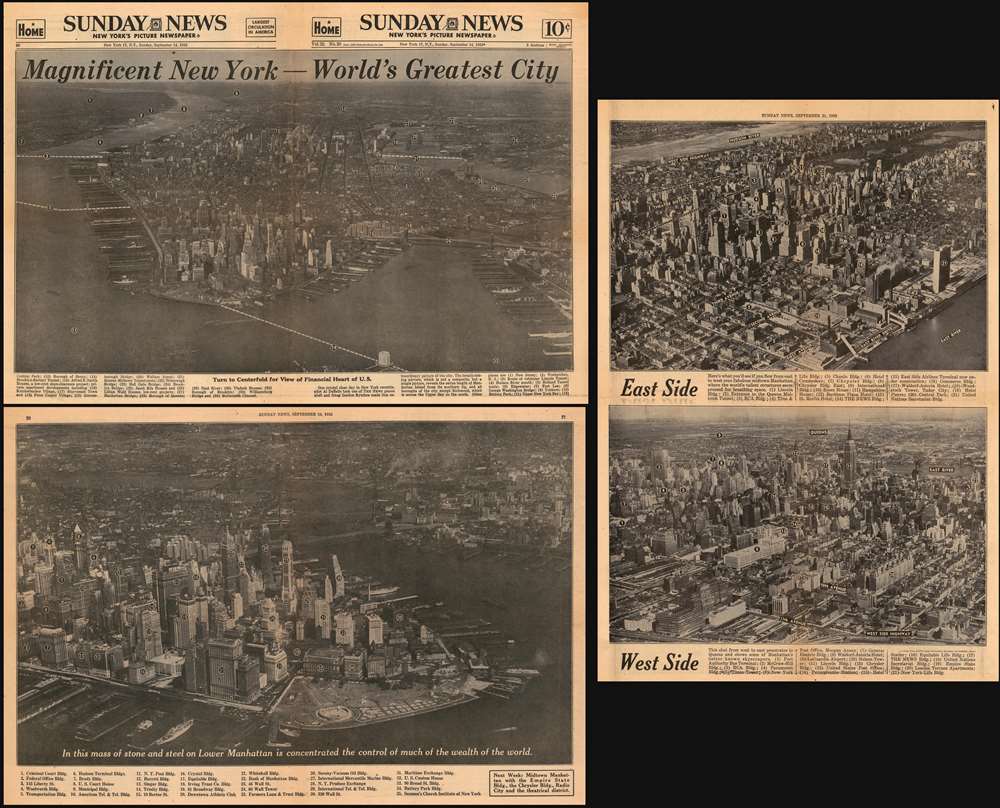 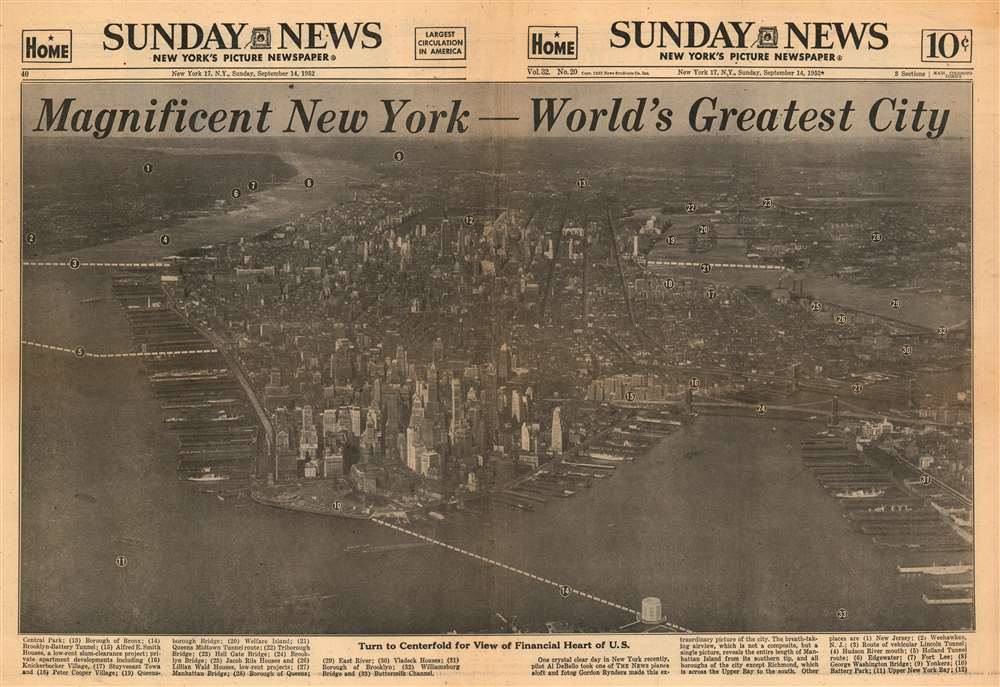 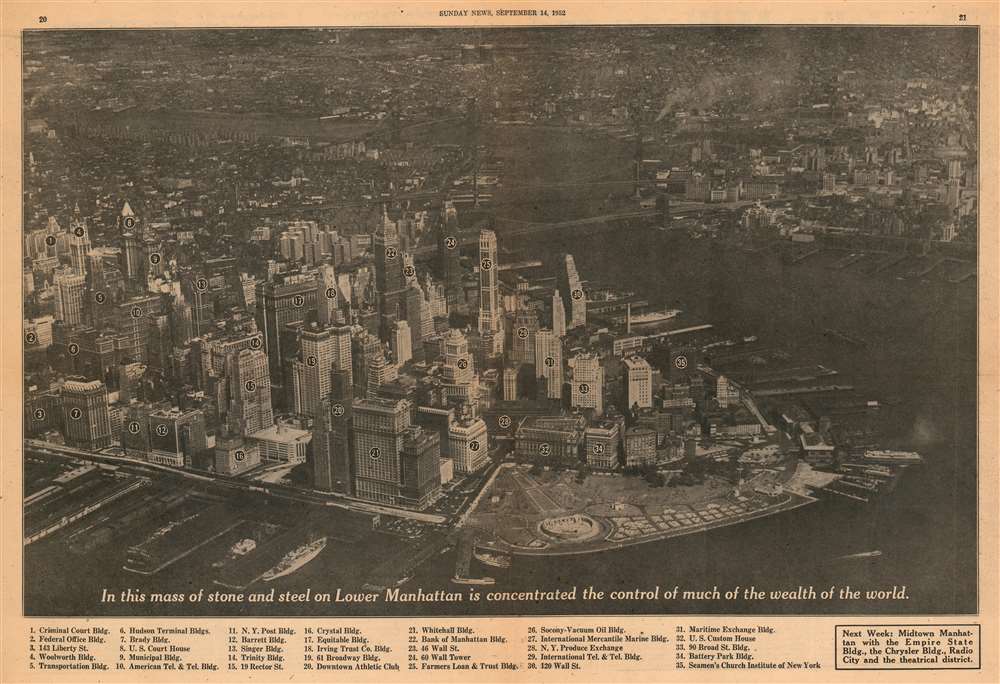 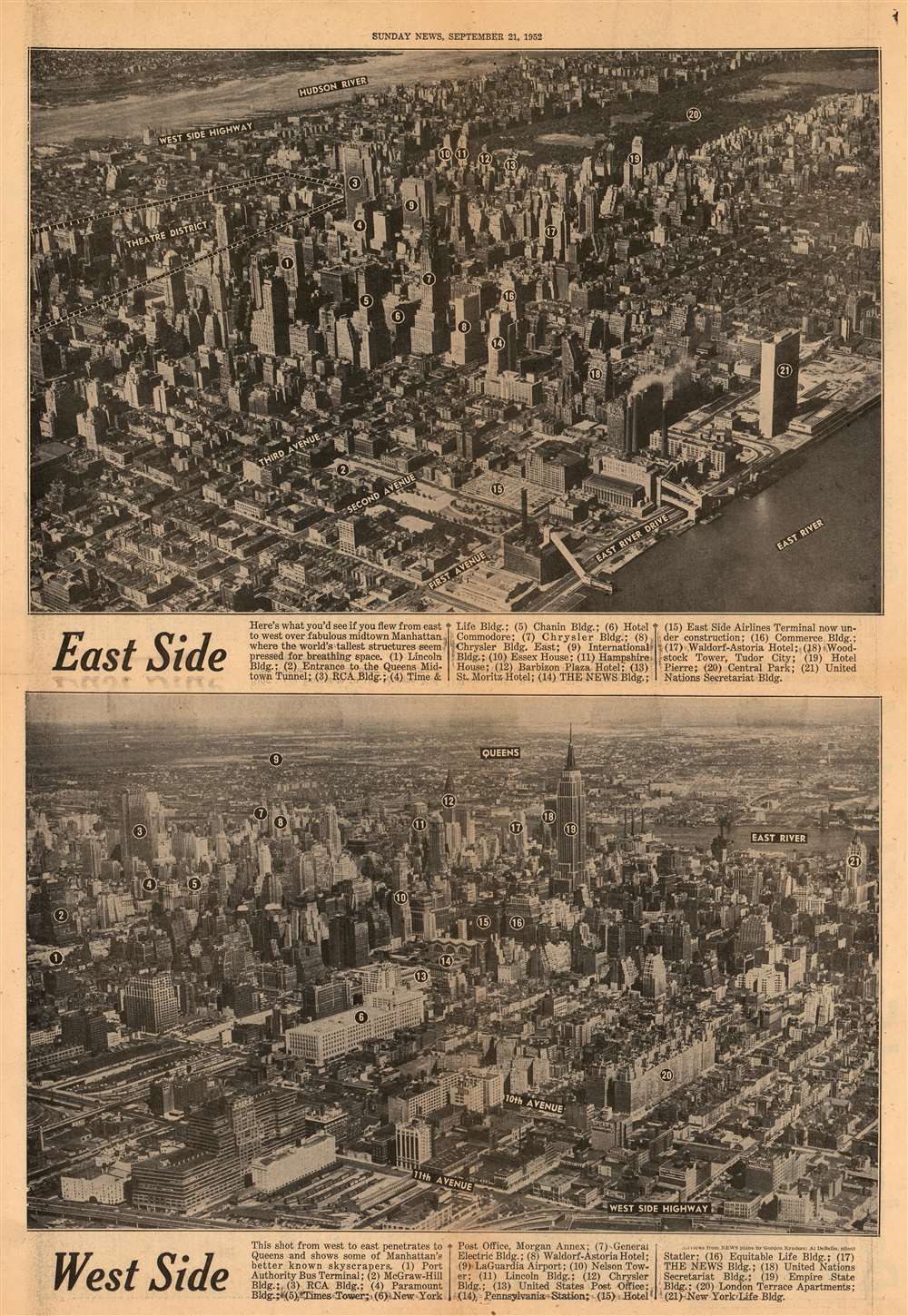 Glorious views of the golden age of the New York City skyline.
$150.00

This is a set of 1952 aerial photographs of Manhattan, taken by Pulitzer-winning news photographer Gordon Rynders and published in two successive issues of the New York Sunday News (September 14 and September 21, respectively). They comprise of a two-page cover illustrating Manhattan from the south; a two-page centerfold focusing on the financial district; and a one-page spread of supplemental views capturing the East Side and West Side of Manhattan. Each view includes a list of featured buildings, numerically keyed to the views. The crowing text of the first page describes the circumstances of the set:

One crystal clear day in New York recently, pilot Al DeBello took one of THE NEWS planes aloft and fotog Gordon Rynders made this extraordinary picture of the city. The breath-taking airview, which is not a composite, but a single picture, reveals the entire length of Manhattan Island from its southern tip, and all boroughs of the city except Richmond, which is across the Upper Bay to the south.

The equally grand view of the financial district bears the legend, 'In this mass of stone and steel on Lower Manhattan is concentrated the control of much of the wealth of the world.' The supplemental views published the following week show Manhattan's East Side - 'Here's what you'd see if you flew from east to west over fabulous midtown Manhattan where the world's tallest structures seem pressed for breathing space.' The view includes the newly-completed United Nations headquarters on the East River. The West Side shot, which 'penetrates to Queens and shows some of Manhattan's better known skyscrapers,' shows the Chrysler building and the Empire State building in their glory.

Gordon Rynders (April 16, 1917 - April 6, 2007) was an American news photographer. He was a Pulitzer Prize winning aerial photographer for the New York Daily News; he retired in the 1970s, having worked for that paper (and the Sunday News, which the Daily News absorbed) for thirty eight years. He was awarded the Pulitzer for outstanding examples of news photography in 1959 for his photographs capturing the dramatic fire of the tanker Graham, aflame after it collided with another tanker. He was dedicated to his work: according to his widow Charlotte, 'Gordon's biggest disappointment was on the Andrea Doria sinking,' said his wife, Charlotte Rynders. 'They had been circling the ship for hours, and it sank while they were on a break to refuel, so he missed the picture.' He was also an avid salt water sports fisherman. Learn More...

Very good condition. Aerial photograph in newsprint. Marginal wear and artifacts of newspaper delivery process not affecting printed images, else excellent. Size given is for each of three sheets.
Looking for a high-resolution scan of this?