1854 Pharoah Map of the Hyderabad, Sangareddy and Nalgonda Districts, India 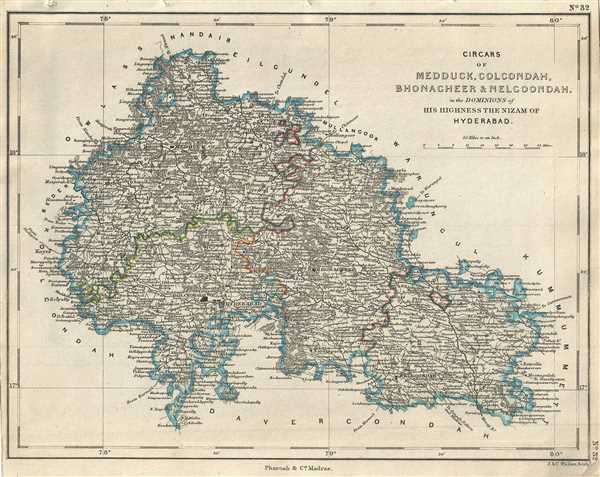 1854 Pharoah Map of the Hyderabad, Sangareddy and Nalgonda Districts, India

Maps of the Hyderabad and Golconda Districts of Telangana, India, home to the famous historical Golconda diamond market.

This is a nice 1854 map issued by Pharoah and Company depicting the Circars or Sarkars of Medak, Golconda, Bhuvanagiri or Bhongir and Nalgonda. The map covers the modern day districts of Hyderabad, Sangareddy, Nalgonda and part of the Warangal and Ranga Reddy Districts in the Indian State of Telangana. The capital of the Nizam’s dominion and Hyderabad State, city of Hyderabad, is identified.

Golconda, home to the famous Golkonda Fort is also noted. This region was historically known as a center of trade for the diamond and pearl industry. The world renowned Hope Diamond, Kohinoor Diamond, Daria-i-Noor Diamond, and Nassak Diamond are believed to have come from diamond mines near Golconda.

Circars or Sarkars were historical division of a province used in the Mughal states of India. The regions of Medak, Golconda, Bhuvanagiri or Bhongir and Nalgonda were part of the princely state of Hyderabad from 1724 to 1948, until the Nizam was overthrown by the Indian Armed Forces following its independence.

This map was engraved by J. and C. Walker and issued as plate no. 32 by Pharoah and Company in their 1854 Atlas of Southern India.