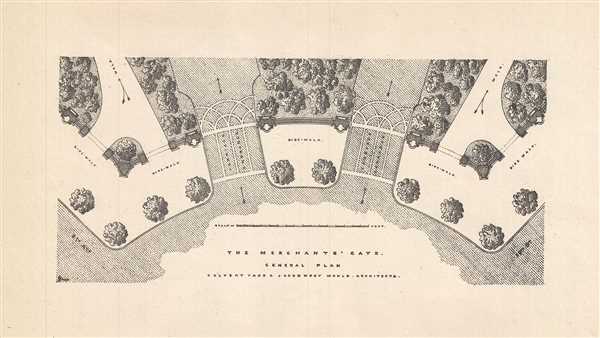 This is a c.1860 plan of the Merchant’s Gate in the southwest corner of New York City’s Central Park. It depicts the architect’s plan of the most heavily used entrance of Central Park. Notes the planned ornamentation including sidewalks, walkways, location of trees and plants, etc. This plan by architects Calvert Vaux and Jacob Wrey Mould was included in the c.1860 Report of the Commissioners of the Central Park.

Vaux and Olmsted were awarded the task of designing Central Park in 1853 by the City Common Council. Olmsted's vision drove the overall design while Vaux concentrated his attentions on entrances, bridges, buildings, and other structures within the park. The creation of Central Park, which was to consist of some 800 acres of public forest, pathways, promenades, lakes, bridges, and meadows, was a seminal moment in civic urban design. The park itself was designed as a whole with every tree, pond, and bench meticulously planned. Olmsted wrote: 'Every foot of the parks surface, every tree and bush, as well as every arch, roadway, and walk and been placed where it is for a purpose.'