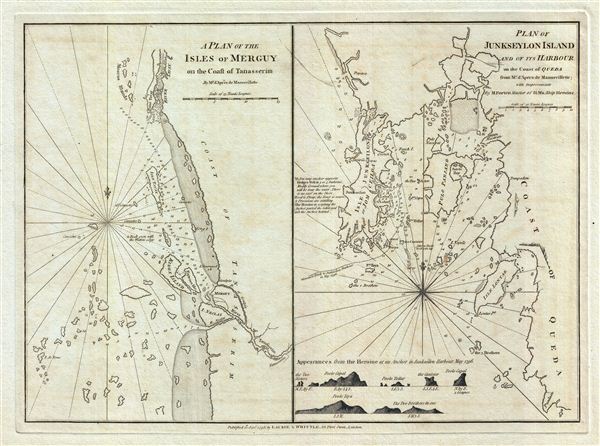 This is a fine example of Laurie and Whittle's 1798 nautical chart or maritime map of the Island of Phuket, Thailand and the Mergui Archipelago (on the coast of the Tenasserim Division), Burma (Myanmar). Essentially two maps on a single sheet, the righthand map details the Island of Phuket or Junk Ceylon along with its harbors and the coast of Queda (Kedah). One of the earlier maps to show Phuket in detail, the map notes the course of the HMS Heroine as it anchored in Phuket harbor in 1796, along with a note providing anchoring guidelines. Near the bottom border, the map includes coastal profile views of 'Appearances from the Heroine at an Anchor in Junkseilon Harbor, May 1796.' Today Phuket is one of the most visited islands in the world a major center of Thai tourism. In the 18th century Phuket was located on one of the important trading arteries between India and China, as well asa being itself a rich source of tin and rubber.

The right hand map features Burma's Mergui Archipelago (consisting more than 800 islands) centered on Kings Island or the modern Kadan Kyun. When this map was issued this region was at the time under Imperial Burmese rule. Following the First Anglo-Burmese War the archipelago was ceded to Great Britian.

The map offers rich detail including countless depth soundings, notes on the sea floor, commentary on reefs, rhumb lines, shoals, place names and a wealth of other practical information for the mariner. This chart is cartographically derived from Jean-Baptiste d'Apres de Mannevillette's similar chart issued for the 1745 Neptune Oriental with updates and rivisions by M. Forten, Master of the HM's Ship Heroine. This map was published by Laurie and Whittle from their offices at 53 Fleet Street, London, on January 1, 1798.