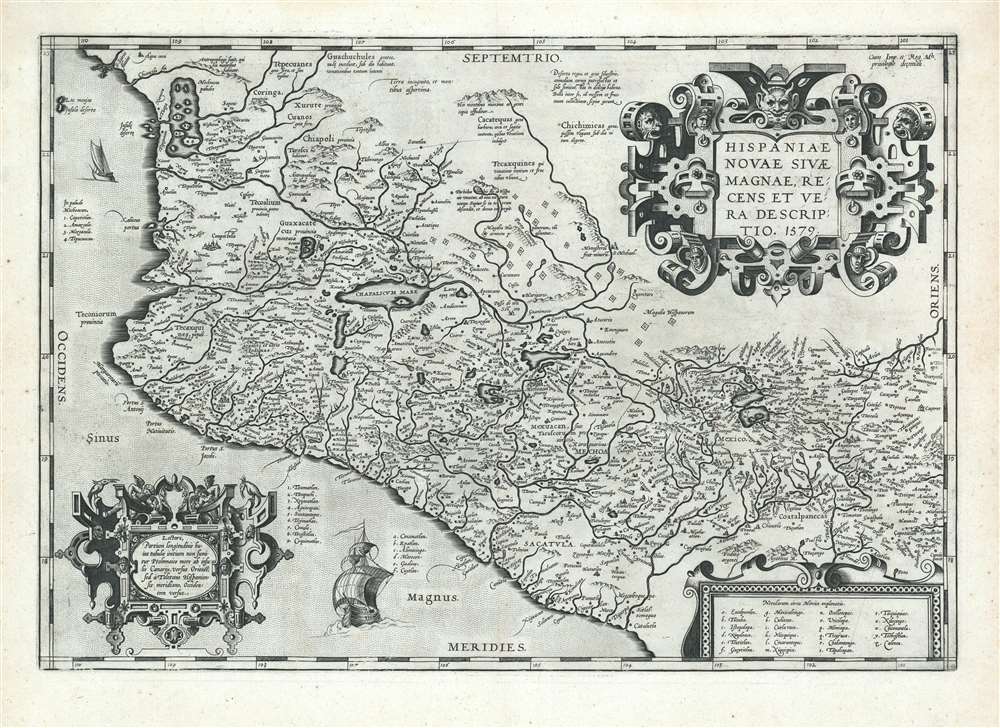 The First Atlas Map of Mexico in a Beautiful, Bold Example

This is a superb example of Ortelius' 1579 Map of Mexico, the first Atlas map of New Spain, in a Latin-text edition of 1592. It shows Spanish settlements in the interior, and an array of rivers and lakes both actual and imagined. The beautifully executed strapwork cartouches are embellished with putti, heads in native headgear, and ferocious beasts.

The map embraces central and western Mexico, including Mexico City in the southeast, Compostela in the west, Guadalajara and Michoacan in the central part of the map. Queretero and San Miguel de Allende are also marked on the map. In addition to these recognizable place names, there are marked on the map a number of Spanish military encampments, suggesting continuing campaigns to subdue indigenous populations in the central part of Mexico. Exhibiting such detail, the map is certainly derived from a first-hand report, though sadly and uncharacteristically Ortelius does not provide a source. The best report that comes down to us is Eduard Brandmair's 1914 attribution of the map to the French cartographer Jean Duran, based on a note by the eighteen‐century mapmaker and editor, Didier Robert de Vaugondy. This source map does not appear to have survived.

In addition to containing contemporary information, the map is presented within a modern cartographical framework. Ortelius explains to the reader, in Latin text to the lower left of the map: 'To the reader; the beginning of the longitude on this map we have not, in the Ptolemaic fashion taken from the Canary Islands towards the East, but from the Spanish meridian in Toledo towards the West.' By deviating from Ptolemaic convention, Ortelius places the work squarely in the 16th century, as opposed to Ptolemy's era in the second century.

Van den Broecke estimates that approximately 6675 copies of this map were printed over the period the map was included in Ortelius' atlas, and it is fair to assume that perhaps ten percent of these have survived in one form or another. About fifteen copies of various editions of the map appear in OCLC collections; the map appears on the market with some regularity with wild variations in condition.

Ortelius A., Theatrum Orbis Terrarum, (Antwerp), Latin Edition, 1592.     Abraham Ortelius' magnum opus, Theatrum Orbis Terrarum, was the world's first regularly produced atlas, which 'set the standards for later atlases . . . It was the first undertaking of its kind to reduce the best available maps to an uniform format.' (Koeman) A modestly-sized work of fifty-three maps in its first edition of May 1570, it was an immediate success: there were three further editions that year, and the work remained in print for a total of 32 editions, the last of which was 1641, well after its author's 1598 death. Ortelius added to his atlas constantly, and by 1595 the Theatrum contained 147 maps. Ortelius is renowned generally as an editor, and indeed much of the Theatrum is compiled from a variety of sources: in such cases, Ortelius was scrupulous in naming his sources. But Ortelius was also a mapmaker in his own right: many of his maps are a distillation of various sources into his own work, and there were many maps - particularly in his atlas of Biblical and ancient history Parergon - which were entirely Ortelius' work. In his role as an editor, Ortelius followed in the footsteps of Munster, whose Cosmographia was, until Ortelius, the best window on the world for the curious European reader. In terms of the artistry of his maps, Ortelius oversaw the first great flourishing of copperplate engraving in the service of cartography to occur in Northern Europe. Ortelius' work provided the model for the atlases of Mercator, Hondius, Blaeu and all their progeny in the 17th century - many of whom were to produce faithful editions of Ortelius' maps in their own productions.