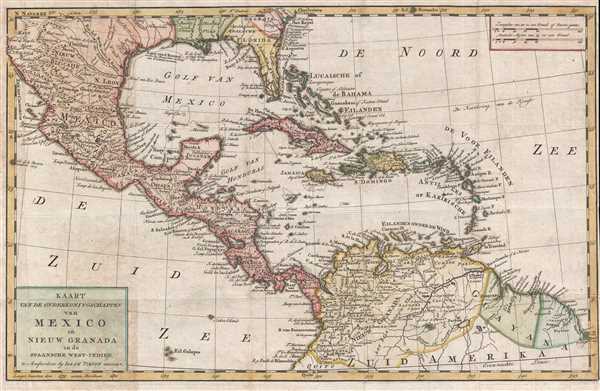 Beautifully colored and highly detailed map of Mexico and the West Indies.

This is a 1765 Isaak Tirion map of Central America and the West Indies. The map depicts the region from the southern United States to northern South America and from the Pacific Ocean to the Atlantic Ocean. Each of the Caribbean islands is illustrated and labeled, even within the Bahamas and the Virgin Islands, along with Cozumel located off the Yucatan Peninsula and Grand Cayman south of Cuba. The Galapagos Islands off the Pacific coast of South America are also identified. Cities, towns, and villages throughout the region are labeled, including New Orleans, Charleston, Pensacola, St. Augustine, Havana, Acapulco, Veracruz, Portobello, Cartagena, Paramaribo, and Cayenne. Myriad rivers and mountains are illustrated from the United States to South America.