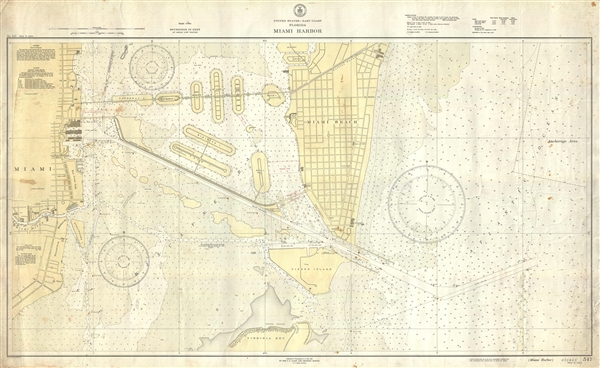 This is a scarce 1936 U.S. Coast and Geodetic Survey nautical chart or maritime map of Miami South Beach. This map is unusual in that it covers the southern portion of Miami Beach from about 24th Street, currently called South Beach, an ultra-hip resort area. The full coverage is from NE 24th Street in Miami proper to Virginia Key and from Miami Beach 24th Street to Point View. It covers the extremely wealthy Islands in Biscayne Bay, including the Venetian Islands (Belle I., Rivo Alto, Di Lido, San Marino, San Marco, and Causeway Island) as well as Hibiscus Island, Palm Island, Star Island, and Fisher Island, among others. It is primarily a nautical chart without countless depth soundings, pipeline areas, and deep-water channels identified. Still, there is some interesting inland detail. Most of the major streets are shown, if not labeled. Also noted are a number of Miami Beach's important early hotels, but they are not identified by their proper names, rather by descriptions of what might be seen from sea. For example, the Flamingo Hotel, opened in 1920, Miami's first truly 'Grand Hotel', known for its gigantic glass come, is here simply identified as the Dome Hotel.

This chart was issued in 1936 under R. S. Patton, director of the Survey. The present example has been updated and revised to 1938.

Good. Some wear and light soiling from use.