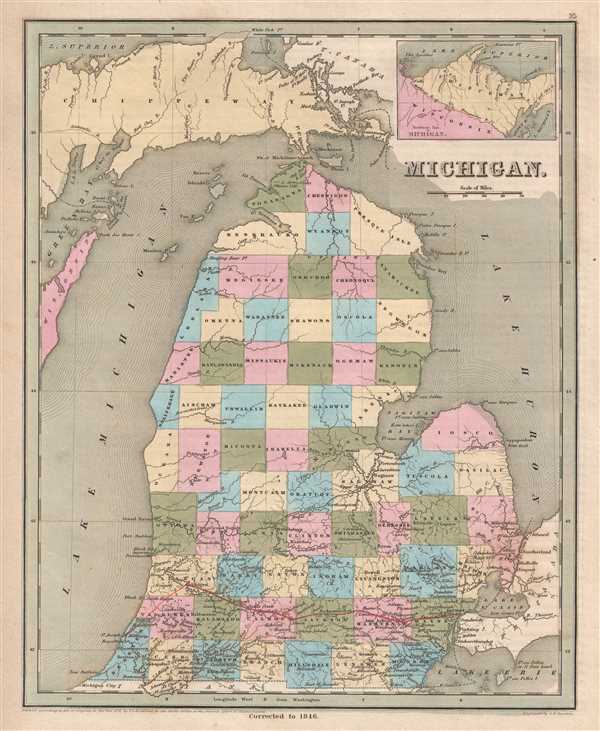 This is an 1846 Thomas G. Bradford map of Michigan. The map depicts the region from Lake Superior, Green Bay, and Wisconsin to Lake Huron and from Lake Superior to Indiana and Lake Erie. Significantly updated from the 1838 edition created eight years earlier, here the Lower Peninsula is entirely divided into counties, whereas in 1838 the northern half of the peninsula was illustrated as being one large county, just as the Upper Peninsula is here. The Michigan Central Railroad, incorporated in 1846, is highlighted in manuscript red ink. The manuscript addition continues further than the original imprint, which only depicted the trackage extending to Allegan. Originally chartered in 1831 as the Detroit and St. Joseph Railroad, the organization quickly ran into financial difficulties. The state government bailed out the railroad in 1837, renaming it the Central Railroad of Michigan. The state then sold the railroad to the newly incorporated Michigan Central corporation in 1846, which operated the railroad independently until 1867 when it was acquired by the New York Central Railroad.

Highly detailed, each county is illustrated, labeled, and shaded a different color to allow for easy differentiation. Numerous cities and towns are labeled, including Detroit and Ann Arbor (Ann Arbour). Myriad rivers and lakes are illustrated, some of which are labeled while others are not. An inset map, entitled 'Northwest Part of Michigan' is situated in the upper right corner and depicts the western part of the Upper Peninsula and northeastern Wisconsin.