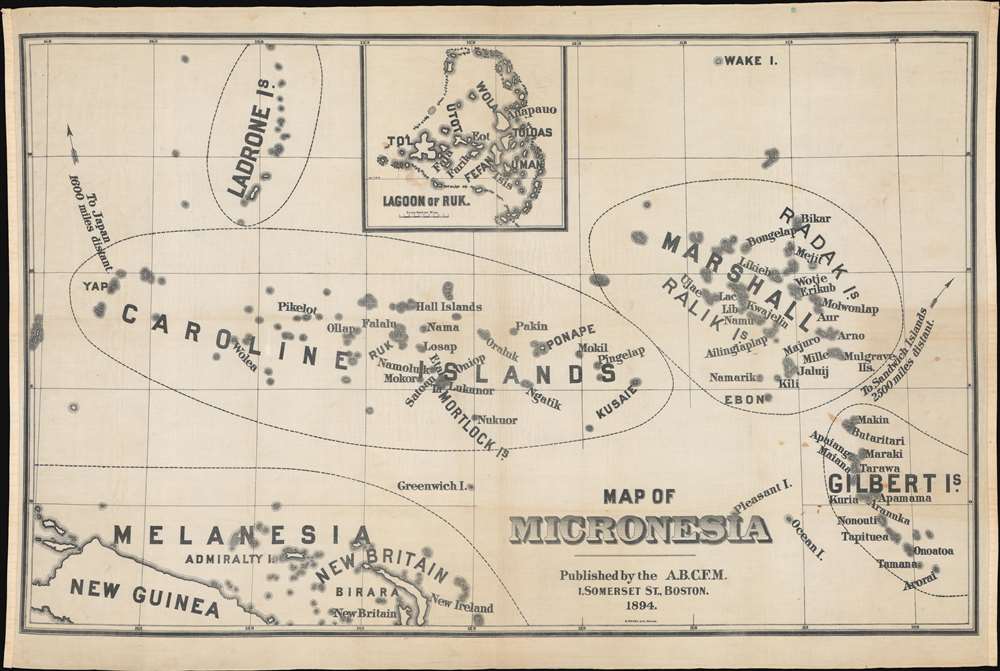 Spreading the Word of God to Pacific Islanders.
$650.00

This is a separately issued 1894 American Board of Commissioners for Foreign Missions cloth map of Micronesia. The map focuses one four archipelagos in the Pacific Ocean: the Ladrone Islands (today known as the Marianas Islands), the Caroline Islands, the Marshall Islands, and the Gilbert Islands. Parts of Melanesia, including most of New Guinea and New Britain, along with the Admiralty Islands, are situated in the lower-left corner. An inset of the 'Lagoon of Ruk' appears along the top border.

The American Board of Commissioners for Foreign Missions in Micronesia

The American Board of Commissioners for Foreign Missions first sent missionaries to Micronesia in 1852. Three couples, by the last names of Snow, Gulick, and Sturgis, arrived on Kusaie and Ponape Islands in the Caroline Islands, along with two Hawaiian teachers, and received a warm welcome from the native islanders. Missionary activities spread to the Gilbert and Marshall Islands in 1857 with the arrival of more missionaries from the United States. These missionaries immediately began learning the local languages, creating written forms when none existed, and then translating Christian texts into the local languages. This allowed the missionaries to teach their students (and future converts) reading and writing, which, in the 19th century, played a critical role in evangelizing. Missionaries would come and go from the region for the next forty years. New individuals would arrive from Hawaii or the U.S., while experienced individuals were forced to retire and return to 'civilization' due to their age or poor health. Ruk, in the Mortlock Islands, was one of the last island groups 'colonized' by A.B.C.F.M. missionaries, with a permanent mission set up in 1884.

It the second half of the 19th century, it was commonly believed that the Christianization of the world was a pre-requisite for the Second Coming of Christ. Maps like this, which were issued for the proselytization effort, tended to simplify global religious diversity. They present an easily digestible and preferred model of religion, wherein large geographical blocks can be assigned to this or that faith. This approach allowed for propagandization of the missionary effort itself, selling the successes of missionary work not only to those being converted but also at home to future missionary generations and financial backers.

Large format cloth maps like this began appearing around 1845 when the rise of commercial lithographic printing in the United States made their production both practical and economical. Unlike copper plate printing process, lithographic printing could easily imprint images on cloth. This was of particular value for missionary work, which often involved harsh field conditions that would quickly destroy any similarly sized paper map.

The American Board of Commissioners for Foreign Missions (A.B.F.C.M.) (1810 - 1961), founded in 1810 by Congregationalists in Massachusetts, was the first foreign missionary soceity in the United States. Its firstt missionaries left for Calcutta, India, in 1812. The A.B.F.C.M. operated 102 stations and a missionary staff of 600 throughout the world by 1910, in places including India, the Philippines, Hawaii, Rhodesia, South Africa, and Japan. The A.B.F.C.M. also sent missionaries to Native American tribes. When the Eveangelical and Reformed Church and the Congregational Christian Churches merged in 1961, the A.B.F.C.M. became part of the United Board of World Ministries, the new church's missionary organization. Learn More...


Berthold Meisel (December 10, 1831 - April 5, 1915) was a German-American lithographer active in Boston during the mid-19th century. Born in Baden, Germany, Meisel immigrated with his brother Augustus (December 12, 1824 - January 24, 1885) and arrived in New Orleands on December 5, 1848. He became a naturalized U.S. citizen on October 15, 1855, a little over a month after Augustus. The brothers worked together in Boston as lithographers until Augustus's death. He died after falling down the stairs and injuring his head. Berthold married his wife Elizabeth on September 4, 1859, with whom he had nine children. Learn More...

Very good. Printed on cloth. Exhibits toning along original fold lines.
Looking for a high-resolution scan of this?