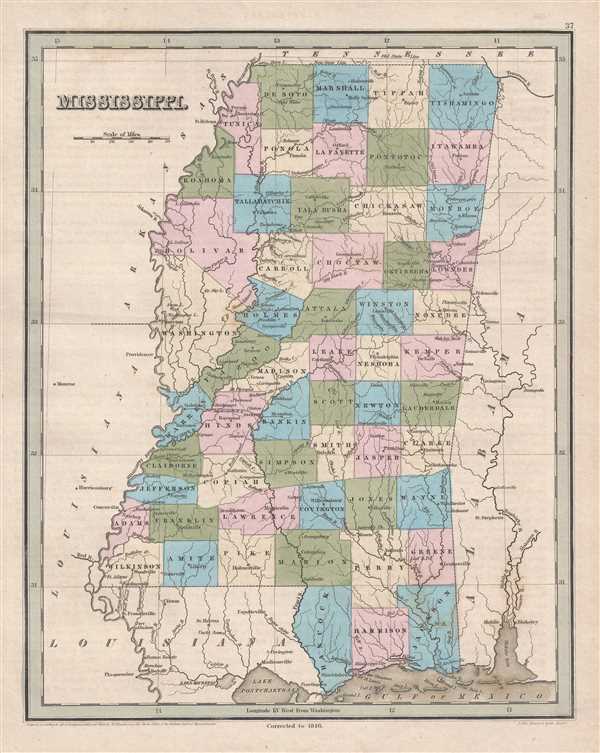 Depicts the West Feliciana Railroad - the oldest standard-gauge line in the U.S. when it was abandoned in 1978.
$400.00

This is an 1846 Thomas G. Bradford map of Mississippi. The map depicts the region from Louisiana and Arkansas to Alabama and from Tennessee to Louisiana and the Gulf of Mexico. As is the case with the majority of the maps included in A Universal Illustrated Atlas, the nascent railroad network in Mississippi is illustrated. Four railroads are depicted: the Natchez, Jackson, and Canton Railroad, the Vicksburg and Jackson Railroad, the Jackson and Brandon Railroad and the St. Francisville and Woodville Railroad. Several of these railroads were rather short, only covering distances of twenty or thirty miles. Although exact histories of these railroads are not easily found, we know that that line between Vicksburg and Jackson was originally chartered as the Clinton and Vicksburg Company in December 1831 and reached Jackson in 1840. The West Feliciana Railroad, between St. Francisville, Louisiana and Woodville, Mississippi, is also illustrated here. When it was abandoned in 1978, the line between Bayou Sara and Woodville was the oldest standard-gauge line in the nation. It appears that all the rail lines completed in Mississippi were intended to transport cotton from plantations to the Mississippi River and that all the railroads were built almost exclusively by slave labor. Some of the corporations that owned and constructed the railroads even owned slaves.

Highly detailed, each county is illustrated, labeled, and shaded a different color to allow for easy differentiation. Numerous towns and villages are labeled, including Jackson, Vicksburg, Oxford, and Biloxi. The mighty Mississippi River winds its way down the map, forming Mississippi's eastern border, along with myriad other rivers and creeks, such as the Pearl River and the Yazoo River. A handful of major cities outside Mississippi are also labeled, including Mobile and Baton Rouge.

This map was engraved by Samuel Styles, Sherman, and Smith of New York and published in the 1846 edition of Bradford and Goodrich's A Universal Illustrated Atlas.


Samuel Stiles (July 15, 1796 - April 3, 1861) was a New York based engraver of maps and bank notes active in the middle part of the 19th century. Stiles was born in East Windsor, Connecticut, and there served his apprenticeship as a line-engraver under self-taught master Abner Reed. In 1821, following his apprenticeship, Stiles relocated to Hartford, Connecticut, with is former master, Abner Reed, to form the firm of Reed and Stiles. Reed and Stiles worked in portrait, historical, landscape, and map engraving on wood and copper. Another former Reed apprentice, Pelton, joined the firm in 1822, changing the name of the firm to Reed, Stiles, and Pelton. Around this time, he also joined the Connecticut State Militia where he was commissioned as a corporal in the same Calvary regiment as his brother Asabel Chapin Stiles. In 1824 he relocated to Utica, New York, where worked with Vistus Balch, also a former Reed apprentice. Stiles and Batch moved to New York together in 1828 to found Balch and Stiles, banknote engravers. In 1833 Samuel Stiles partnered with Joseph Hutchins Colton, then a young man, to found Stiles and Company – Colton being the 'company.' This partnership lasted until 1836 when he and Colton published their great plan of New York City, known as the 'Colton Map.' Colton went his own way and became a major American map publisher. Stiles moved a few blocks away and partnered with George E. Sherman and Colin Smith to found Stiles, Sherman and Smith. The partnership dissolved in 1840 and Stiles took up again with J. H. Colton, who was already becoming prominent. In 1841, he joined the firm of Danforth, Ball, and Company, Bank Note Engravers. This firm eventually merged into the American Bank Note Company. In 1859 Stiles became a founding member of the National Banknote Company, which incorporated as the American Banknote Company. He was the treasurer of this successful firm until his death in 1861. On a side note, Stiles married the daughter of Abner Reed, Charlotte Sophia Reed, in 1825. Their son, Henry Reed Stiles attained fame of his own as historian and genealogist. Learn More...