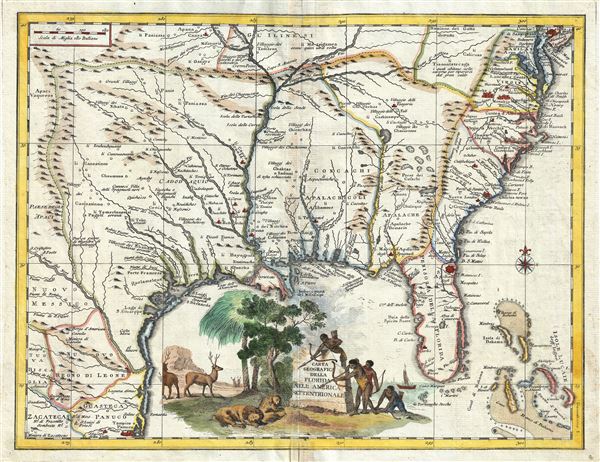 A rare decorative map of the southeastern United States in the colonial period.

This scarce map by Giambattista Albrizzi is a curious and somewhat retrogressive 1740 Italian variant on Delisle's 1718 map of Texas, Louisiana, Florida, and the southeastern British coastal colonies. Roughly following the topical model as laid down by Ortelius in 1584, this map is centered on the Mississippi River and covers from the Rocky Mountains to the Atlantic and from the latitude of Philadelphia to Panuco (Mexico) and the Bahamas.

Many of the cartographic elements here are curiously antiquated having been updated by Delisle in his 1718 map - suggesting that Albrizzi must have either had an earlier variant of Delisle's map in hand when this map was composed or, more likely, chose to 'update' the Delisle map with other outdated sources. One such example is the curious half-moon shaped lake at the northern terminus of the Apalachicola River. This lake appeared in some early French maps but by 1740 had largely been abandoned as unlikely by most cartographers. This is also one of the last published maps to incorporate John Lederer's c. 1670 nomenclature in Carolina - including the 'Deserto Akenatzy,' the 'Pinnura cooperta d'acqua' and the 'Lago Grand' (a vestigial variant on the apocryphal 'Great Lake of the American Southeast')

Throughout the map cities and fortifications are rendered pictorially in the early 18th century European fashion. In particular, St. Augustine is presented as a mighty fortification. Other cities so rendered include Philadelphia, Charleston, Panuco, and (curiously) several Mohawk villages in Virginia. Smaller towns and American Indian villages are presented as churches.

The political divisions presented here are also of exceptional interest. The cartographer limits the British colonies to a narrow band of land to the east of the Appalachian Mountains. Georgia is identified within the limits of South Carolina and North Carolina is 'Virginia Vecchi' (Old Virginia). Virginia itself hosts two large Mohawk villages within its Various European towns in Virginia, including Jamestown, are clearly intended to be overshadowed by their Amerindian neighbors. To the west of the Appalachian Mountains and bounded by the Apalachicola River, is the territory of Apalache. West of the Apalachicola River as far as the Mississippi, Albrazzi identifies Concachi or Apalachicoli. Beyond the Mississippi, a vast region abstractly following the boundaries of the original Texas charter is identified as Cadodaquio, referencing an American Indian tribe known among the French as the Quadodaquious and among the Spanish as Kadohadachos. The name 'Texas' or even 'Tejas' does not appears - a curious omission given that the 1718 Delisle map upon which this is loosely based is in fact the first published map to name Texas.

Albrizzi's incorporation of a large decorative cartouche at bottom center is of special note. The graphic, which includes lions and deer (despite the fact that lions are not indigenous to the Americas), as well as stylized American Indian hunters, was most likely drawn by the well-known Italian artist Giovanni Battista Piazetta (c. 1682 - 1754). The incorporation of Piazetta's graphic elements, which innovate by being more descriptive that allegorical, was an important advancement for 18th century Italian school cartography and set the stage for the later cartographic publications of Antonio Zatta, among others.