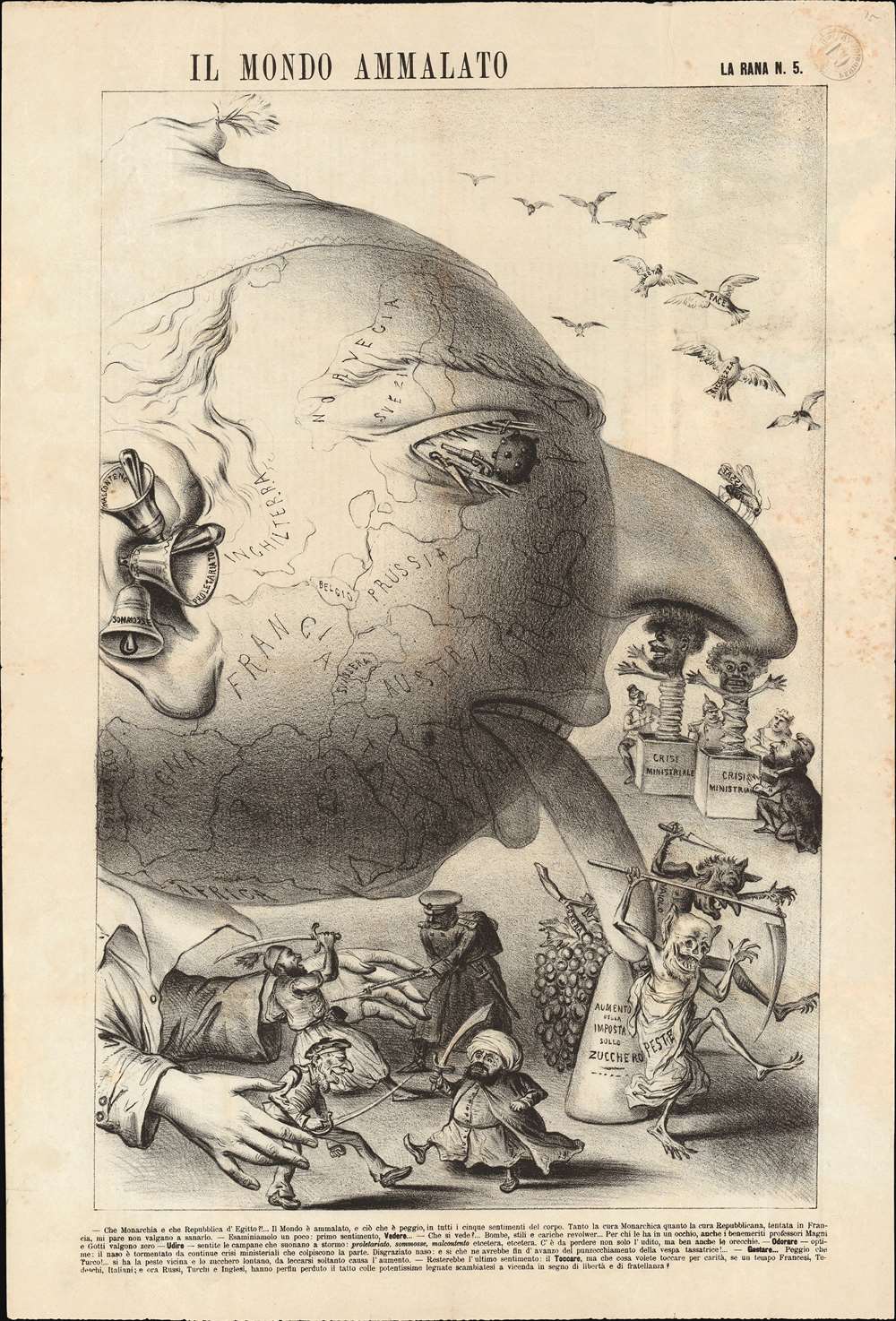 A remarkable January 1878 Italian political broadside illustrating the world as a giant head plagued by illness. The giant's head takes the form of the globe, wherein the mouth roughly occupies the Black Sea, the nose Russia, and the eyes Finland. Although the title, Il Mondo Ammalato translates as 'The Sick World,' the reference here is to the Ottoman Empire, then known as the 'Sick Man of Europe.' The figure is clearly the Sultan Abdul Hamid II (1842 - 1918), who was invested as 34th Ottoman Emperor in 1876, identifiable from his distinctive large hooked nose and fez. At this time the Ottoman Empire was beset on multiple levels, including but not limited to riots, broad governmental changes, the Russo-Turkish War (1877 - 1878), calls for democracy in Egypt, high taxes, the failure of old alliances, and political backstabbing. Moreover, the author expounds on the problems of the Ottoman Empire as global problems, hence Il Mondo Ammalato. The author laments the global breakdown of monarchy and the decline of old-world values. Italian text at the bottom describes the pictorial,

Monarchy or Republic of Egypt!? … The World is sick, and what is worse, in all five senses. Both the Monarchic cure and the Republican cure, were attempted in France, but it seems they did not heal him. - Let us examine it: first sense, Sight. What do you see? …Bombs, Knives, and Revolvers. … For those who have them in one eye, even the worthy professors Magni and Gotti are worth nothing. Hearing, the bells are ringing like a storm: Proletariat, Riots, Discontent, etcetera, etcetera. Not only hearing, but also ears are to be lost. Smell - [optime] the nose is tormented by continuous cabinet changes. Wretched nose: left over from the pricking of the tax mosquito! Taste … Worse than Turkish! …You have the plague nearby and the sugar far away, licking only makes it worse. The last sense remains, Touch, but who do you touch for care, once France, Germany, Italy; and now Russia, Turkey, and England have abandoned he once powerful treaties exchanged in a sign of freedom and brotherhood! (Geographicus translation)

Most of this content is vague and hard understand without an intimate awareness of the political situation in Europe early in 1878. A lot was going on, the Ottoman Empire, a lynchpin between Russia, Europe, and the Middle East, was crumbling, beset both internally and externally. In Egypt, then a tributary state, the Khedivate of Egypt, Khedive Ismail was being pressured to accept a constitutional ministry limiting his former autocratic power. France continued to suffer social discontent under both the Second Empire and the French Third Republic. Russia and Turkey were at the time involved in the Russo-Turkish War (1877 - 1878), which affected all of southeastern Europe. At the same time, most European countries increased their sugar tax, most particularly Austria-Hungary, leading to economic instability. The text references Francesco Magni (1828–1887) and Vincenzo Gotti (1836 - 1822), well known Bologna based medical doctors and professors, positioning them as allegories for scientific reason. Meanwhile, Russia, Turkey, and England were bypassing old treaties and alliances in an effort to expand their power bases.

The broadside is the centerfold for the 1 sheet Bolognese monarchist periodical, La Rana. All issues of La Rana consist of a single broadsheet, printed on both sides, which folded in half made a 4-page newspaper, including a 2-page centerfold. La Rana was popular, but often censured due to its constant ribbing of powerful political figures, consequently, examples today are rare. The present example of Il Mondo Ammalato, labeled La Rana N. 5 is the only known surviving example.

Very good. Some foxing.
Looking for a high-resolution scan of this?