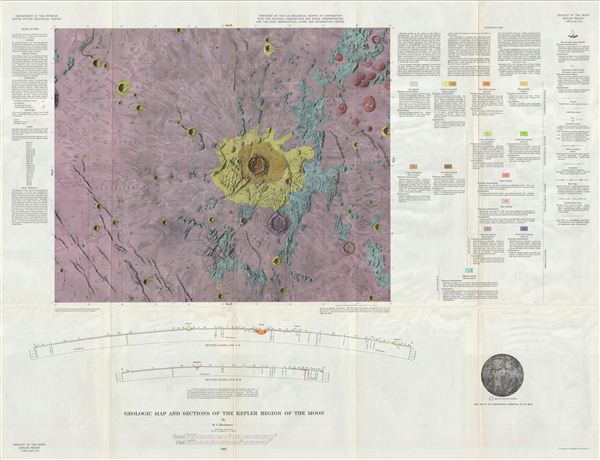 This is the U.S. Geological Survey's stunning full color 1962 Geologic Map of the Kepler Region of the Moon. The crater Kepler is located between the Ocean of Storms ('Oceanus Procellarum') to the west, and the Sea of Islands ('Mare Insularam') to the east, and is notable for the prominent rays it spewed out, that now cover the surrounding mare. Rays are ejecta thrown out by a hypervelocity impact object from outer space.

In creating his system of lunar nomenclature in 1651, Giovanni Riccioli named this crater after the German astronomer and mathematician Johannes Kepler, in part because the crater is intersected by rays from the Tycho crater. Tycho's observations deeply influenced Kepler 's laws of planetary motion.

This map series represents a breath-taking leap forward not only in selenography (the study of the moon) begun in the late 1400s, but also in the record of humankind's fearless exploration of the world(s) around and beyond us.

Created by R.J. Hackman and published as plate I-355 in the United States Geological Survey's Geological Atlas of the Moon.