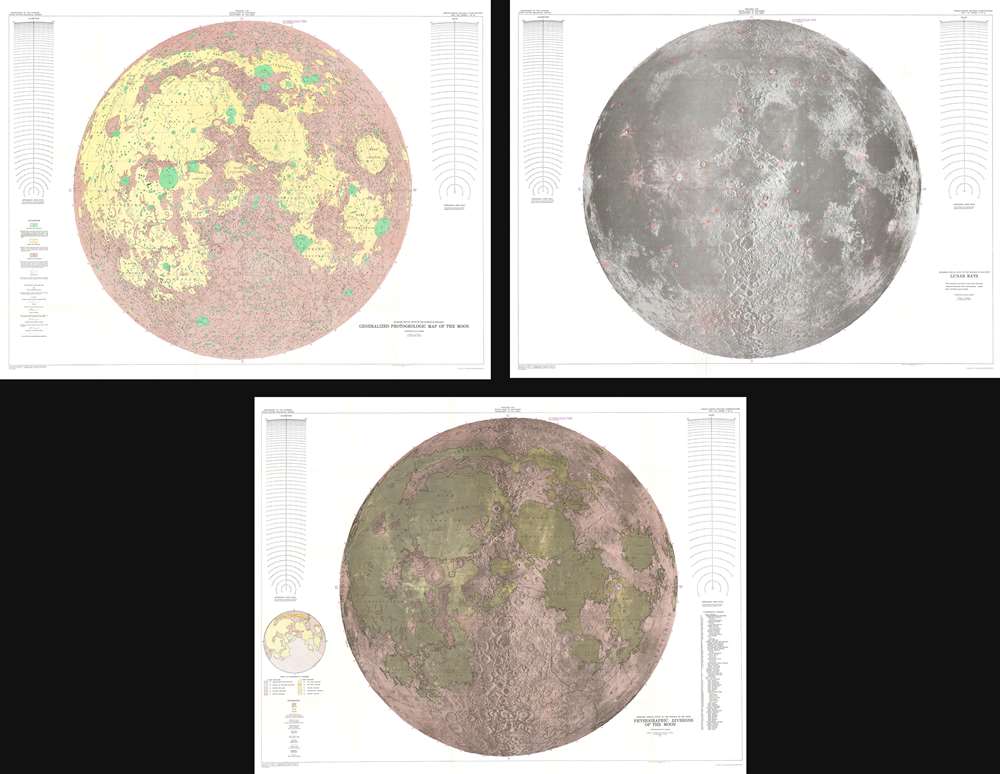 This is a set of three 1961 landmark maps of the Moon made by the U.S. Geological Survey in preparation for the Apollo 11 Lunar Landing Mission. All three represent the near side of the Moon on a scale of 1:3,800,000. Each map illustrates the Moon in a different spectacular monumentally proportioned manner and illustrates the physical geography of the moon, noting craters, seas, mountains, and other formations.

The first map is a general photogeologic map of the Moon and highlights the different kinds of rock formations present on the Moon. The second pays special attention to 'lunar rays.' Lunar rays are the streaks of fine ejecta, appearing almost like the spokes of a wheel, surrounding many of the moon's largest impact craters. The third map in the set focuses on the physiographic attributes of the Moon, labeling the different maria, mountain ranges, and provinces. An index of all these locations is included along the right side.

The Set in General

The work done in compiling these map led Robert J. Hackman to develop the basis for all future planetary mapping and laid the foundations for photogeology, the use of aerial photography to study the geology of a region. Arthur C. Clarke's lunar explorers used these maps for their 'Journey by Earthlight' in 2001: A Space Odyssey.

These maps were originally prepared by the scientists Robert J. Hackman and Arnold C. Mason in 1960 based on photographs taken at Lick Observatory, San Jose, California. This is the second edition issued in 1961.