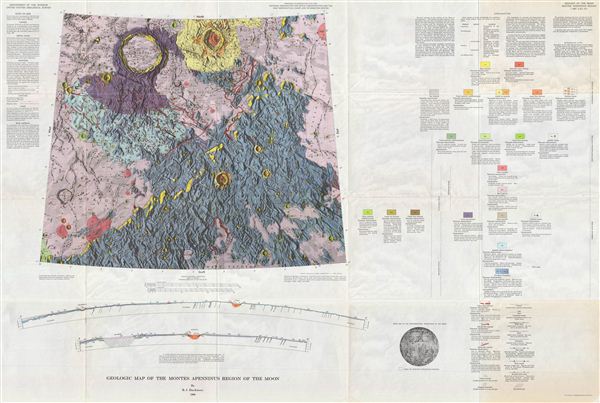 This is the U.S. Geological Survey's stunning 1966 full color Geologic Map of the Montes Appeninus Region of the Moon. Named after Italy's Appenines Mountains, this rugged mountain range features the Moon's highest known mountain (though not highest point), and forms the southeastern border of the large Mare Imbrium, or left eye of the Man in the Moon's face. The crater Archimedes can be seen on the upper left portion of the map, Marco Polo in the lower center, and the Mare Imbrium on the lower left.

This range became famous three years after this map was made, when Apollo 15 landed here and became one of the most scientifically successful missions of the Apollo program, and the most geologically diverse site of the program.

Created by R.J. Hackman and published as plate I-463 in the United States Geological Survey's Geological Atlas of the Moon.