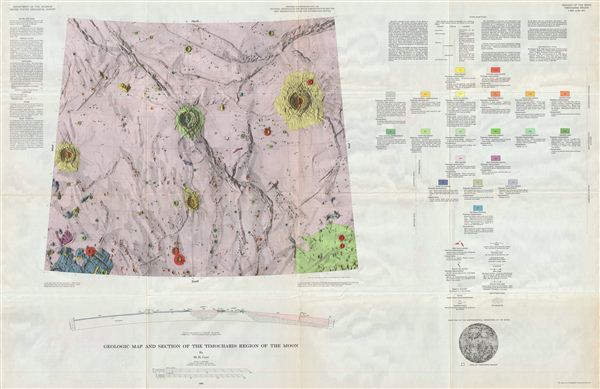 A stunning full color geologic map of the Timorcharis Region of the Moon by the U.S. Geological Survey. Timocharis is a prominent lunar impact crater located on the Mare Imbrium. The lack of prominent rays, or ejecta, from the original hypervelocity impact, puts the age of this crater at about a billion years or more. The crater was named after Timocharis of Alexandria (ca. 320 BC – 260 BC) a Greek astronomer and philosopher, contemporary of euclid, and co-creator of the first star catalogue in the Western world.

As humans wouldn't land on the moon until 1969, how were we able to map its geology? The map's extraordinarily detailed metadata explains that the cartographers used photos, and observations from optical and radio telescopes, with relief created by measuring shadows, combined with an assumed sun angle and an assumed base elevation. The geology was arrived at from observing differences in, and layering of, topographical forms, and in varying albedo (amount of reflected sunlight), both of which indicate different underlying materials formed under different processes.

The map includes a sectional view, detailed ‘metadata' explaining the mapmaking methodologies and symbols employed, and an index map showing the area's location on the Moon. This map series represents a breath-taking leap forward not only in selenography (the study of the moon), begun in the late 1400s, but also in the record of humankind's fearless exploration of the world(s) around and beyond us.

Created in 1965 by M.H. Carr and published as plate I-462 in the United States Geological Survey's Geological Atlas of the Moon.