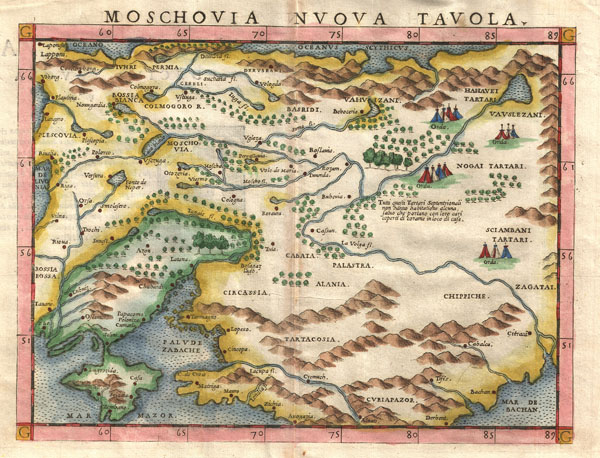 One of the earliest published maps of Russia.

A beautiful example of Girolamo Ruscelli's c. 1574 map of Moscovie. Covers modern day Russia and the Ukraine from the Arctic to the Crimea and as far east as the Caspian Sea. Interest in this area peaked in Western Europe following the discoveries of Barentz, Hudson, and others in Russian Arctic which lead to the founding of the Muscovy Company in 1555. Traders, mostly English and Dutch, discovered they could access the wealth of Eastern and Central Asia by traveling south of Nova Zembla to the Karo Sea, then south some 600 miles by river to Moscow. At this time the Russian Tzar did not yet have access to the Baltic and consequently was at the mercy of the Hanseatic League, which controlled much of the region's trade. The opening of an Arctic route to Russia and the foundation of the Muscovy Company generated enormous wealth for the princes of Russia, eventually bringing the country into the fold of the western European community. Essentially a Ptolemaic style projection, this map was engraved by Girolamo Porro and published as part of Ruscelli's Italian translation of Ptolemy's Geographia. This map is considered one of the 'New Ptolemys,' that is, one of the 38 maps of the modern world drawn by Ruscelli's to supplement the original 27 maps that traditionally existed based upon Ptolemy's texts.


Girolamo Porro (1520 - 1604) was an Venetian engraver, humanist, illustrator, map maker, and publisher. Porro was born in Padua but lived most of his life in Venice. Porro worked with a number of important Venetian humanists including Camillo Camilli, Scipione Barbuo, Porcacchi, Ruscelli, and Ariosto. Cartographically Porro has produced only a few works, but these include such important works as the maps for Porcacchi's 1572 Isole piu Famose del Mondo (including the first obtainable specific map of North America), and the maps included with Ruscelli's 1574 Italian translation of Ptolemy's Geographia. Learn More...

Phillips (Atlases) 167.
Looking for a high-resolution scan of this?