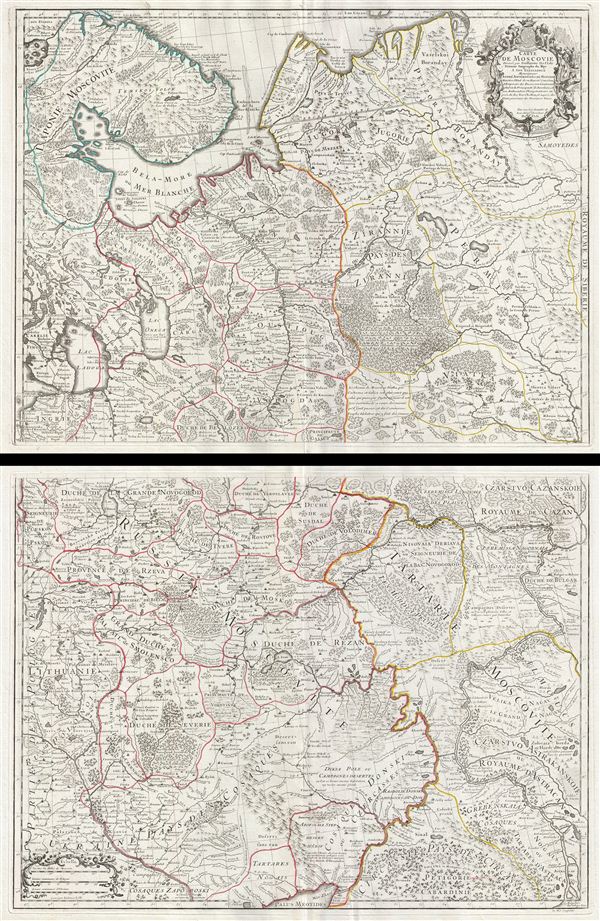 An exceptional example of Guillaume de L'Isle's beautiful c. 1708 two panel map of Russia and the Ukraine. When this map was issued it was by far the most sophisticated map of Russia and the Ukraine yet published and served as a model for most subsequent maps of the region for the next century. Centered on Moscow, De L'Isle's map covers from the Barentz Sea and the White Sea south as far as the Sea of Azov in the Ukraine, and from Poland and Lithuania east as far as Astrakhan and the Samoyedes and the Volga River. Like most of De L'Isle's work, is beautifully engraved with nomadic tents, forests and mountains rendered in profile and swamps, oceanic, and river depths in hachure. Russia at this time was dominated by Tzar Peter I, also known as Peter the Great. Under Peter the Great's influence Russia would, in 1721, be proclaimed and empire and be recognized as a major world power. This map was issued both independently and in numerous atlases issued by De L'Isle and his successors throughout the 18th century. Though undated this example corresponds to the Rumsey example, which he dates to 1708.

Very good condition. Original centerfold. Beautiful dark impression. One of the finest examples of this map we have encountered. Offered in two sheets, as issued, could be joined on buyer's request for an additional fee. Size referenced includes both sheets as if joined.