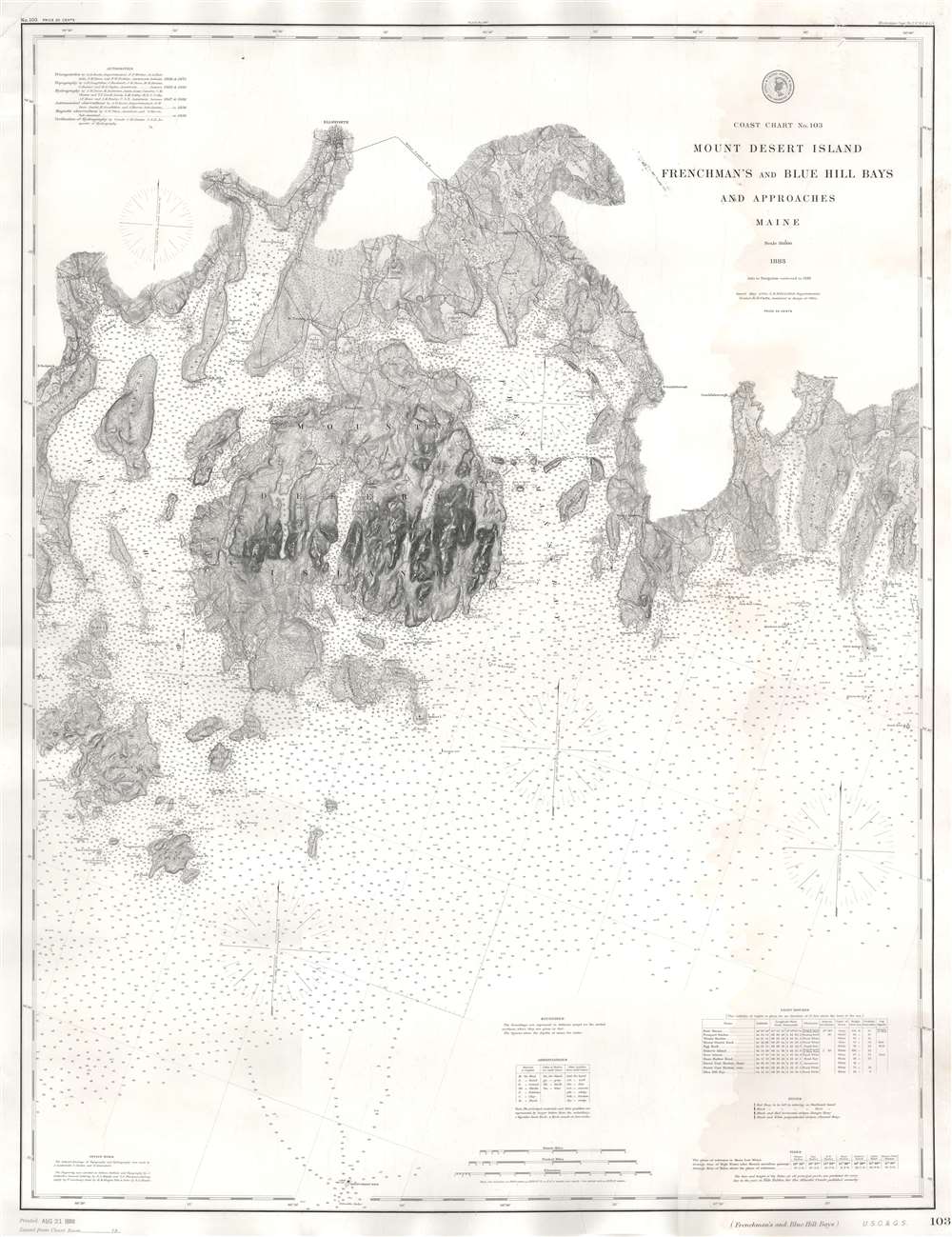 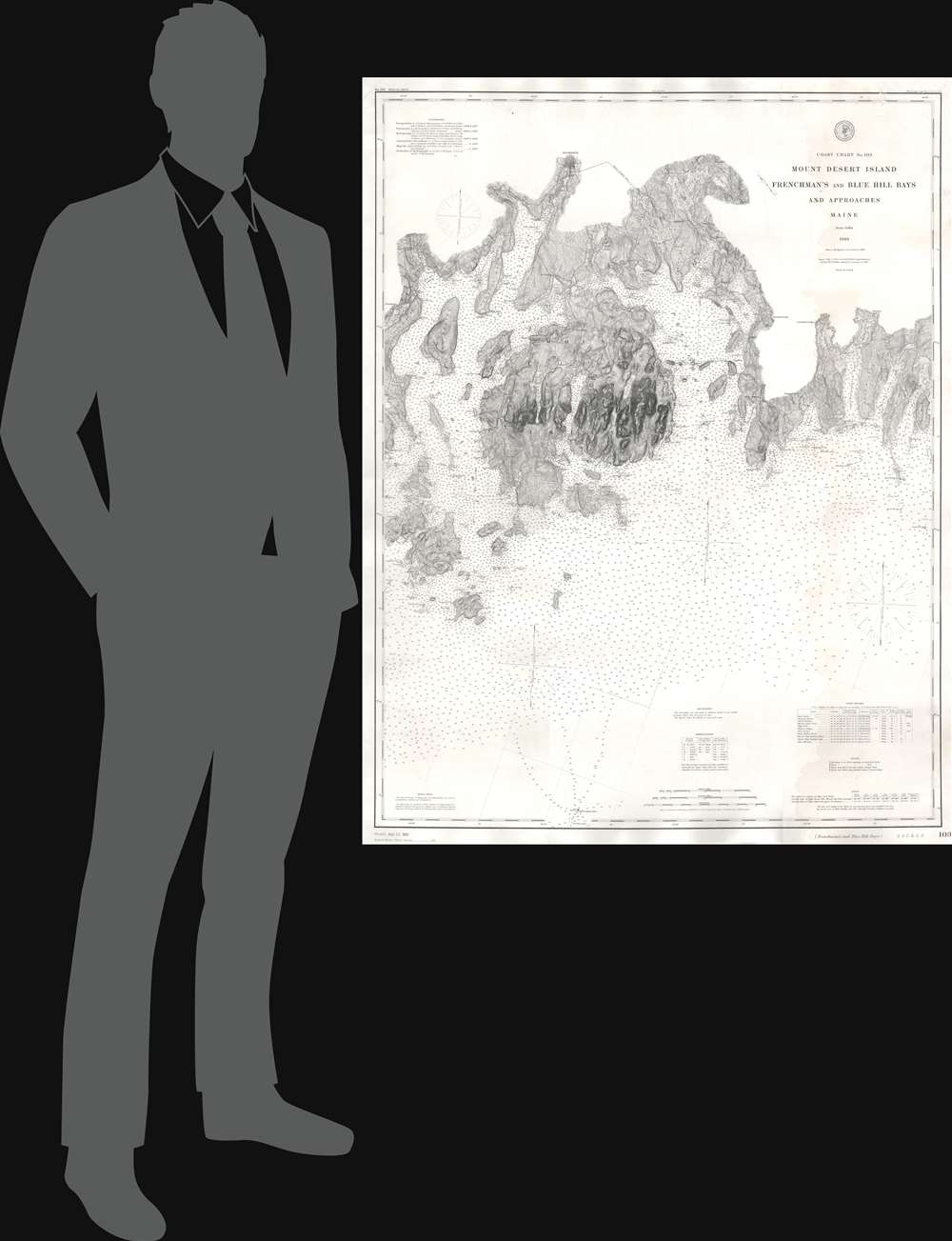 This is an 1888 U.S. Coast and Geodetic Survey nautical chart or maritime map of Mount Desert Island, Frenchman's Bay, and vicinity, Maine. With Mount Desert Island situated slightly to the left of center, the map depicts from New Sedgwick and Blue Hill Neck to Pigeon Hill and Pigeon Hill Bay. Mount Desert Island's celebrated topography is illustrated in detail. Roads traverse the island and individual residences are marked but not labeled. Mountain peaks, harbors, points, coves, ponds, and lakes are all identified as well. Other islands throughout are also illustrated, along with harbors, necks, coves, and bays. As this is a nautical chart, countless depth soundings are indicated.

Popularized as a vacation destination during the 19th century, Mount Desert Island is renowned for its exceptional natural beauty. First brought to public attention by painters of the Hudson River School, tourists and nature lovers began flocking to the island in the 1860s. By 1880, 8 years before the present map was published, the island hosted thirty grand hotels. By the 'Gay Nineties', American social elites and business magnates, including the Rockefellers, Fords, Vanderbilts, and Carnegies, built summer homes on the island's most desirable land. Eventually the Rockefellers acquired most of the island, donating it to the Federal government as a public recreation area, Acadia National Park.

Mount Desert Island, so named because of its many bald rocky mountaintops, has been a tourist destination since the mid-19th century, when it was discovered by outsiders, artists, journalists, Hudson River School artists, and other patrons, known collectively as the 'Rusticators.' Undaunted by crude accommodations and simple food, they sought out local fishermen and farmers for accommodation and guidance. Summer after summer, the rusticators returned to renew friendships with local islanders and, most of all, to savor the fresh salt air, scenery, and relaxed pace. Soon the villagers' cottages and fishermen's huts filled to overflowing, and by 1880, 30 hotels competed for vacationers' dollars. Tourism was becoming the island's primary industry. Drawing the attention of the wealthy and influential, the island was designated as Sieur de Monts National Monument by President Woodrow Wilson in July 1916. In February 1919, the area's status was officially changed from a National Monument to a National Park, making it the first National Park east of the Mississippi River. With the change to a National Park came a name change as well, to Lafayette National Park. It was not until January 1929 that the park was given its current name, Acadia National Park. Acadia is unlike most other National Parks as its creation was encouraged by numerous private individuals. One, John. D. Rockefeller, purchased a summer home in Bass Harbor in 1910. Rockefeller began buying up land on the island with the goal of creating a system of carriage roads to make 'one of the greatest views in the world' accessible to all.

This map was created and published by the United States Coast and Geodetic Survey while Julius Hilgard was Superintendent. This chart was first issued in 1883 and numerous subsequent editions were published, with the current example bearing updates to 1888. An empty OCLC reference exists for this map, suggesting that a former cooperative member created it. Examples of other editions are present in institutional collections.


Richard Dominicus Cutts (September 21, 1817 - December 13, 1883) was an American army officer and civil servant. Born in Washignton, D.C., he attended Georgetown University and graduated in 1835. He volunteered for the Union Army in 1861 and was commissioned as a Colonel and Aide-de-Camp. He served on Major General Henry Wager Halleck's staff until he was made Chief of Staff under Lieutenant General Ulysses S. Grant. He was brefetted to Brigadier General on March 13, 1865, and was mustered out on June 1, 1865. He spent decades working for the U.S. Coast Survey and then the U.S. Coast and Geodetic Survey, where he rose to the position of Assistant in Charge of the Office. Cutts died on December 13, 1883, after contracting an illness during his return from a geodetic conference in Rome. He married Marth Jeffereson Hackley on December 16, 1845. Learn More...

Very good. Mounted on linen. Exhibits minimally disfiguring dampstaining along the full right side of the map.