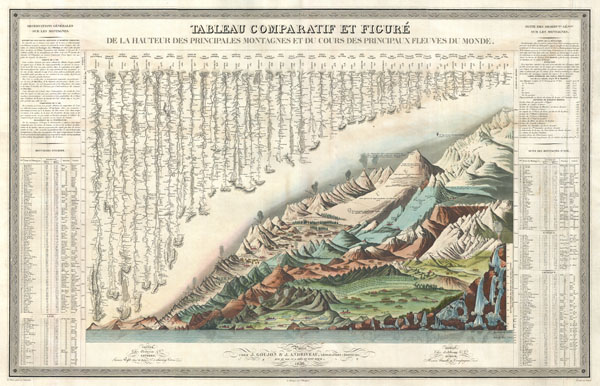 The comparative mountains section, occupying the lower right half of this chart, details the principle mountains of the world. Ranges are color coded to show different types of vegetation and numerically reference tables to the left and right of the chart proper. The elevation of a number of important cities including Paris, Rome, London, Geneva, Mexico, Bogota, and Quito, among others, is noted. There are also extensive notations on vegetation, volcanic activity, and lichen, much of which is no doubt influenced by Humboldt. The Himalayan peak Dhaulagiri is identified as the world's greatest mountain. A waterfall chart occupies the extreme bottom right with the Pyrenean waterfall of Gavarnie identified as the world's highest.

This is a rare opportunity to own one of the finest comparative mountains and rivers charts to appear in the 19th century.

OCLC 953572390. Walter, John A., The Heights of Mountains and the Lengths of Rivers.
Looking for a high-resolution scan of this?