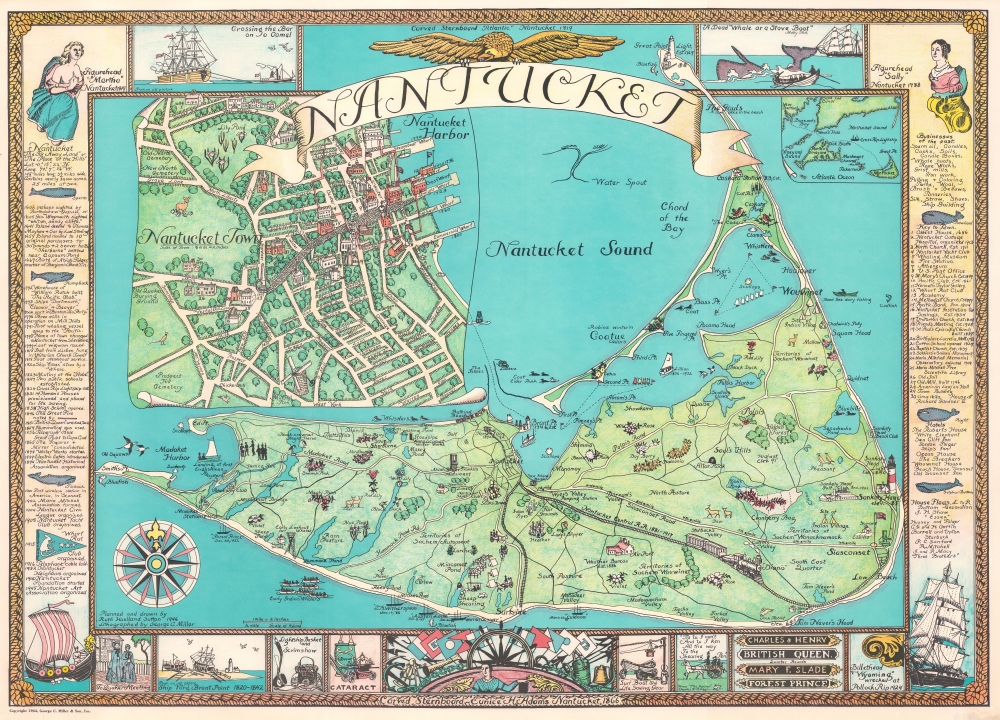 Nantucket, as memorialized by a devoted, adoptive local artist.
$2,100.00

This is a beautiful example of the 1964 edition of Ruth Haviland Sutton’s pictorial map of Nantucket, Massachusetts. This vivacious depiction of the island emphasizes its nautical history and character. Its execution reflects the love of place that led Sutton to relocate there for most of her adult life. The waters around the island are decorated with boats and ships – some native, some European, some afloat but many shipwrecked (these last have the dates).

Capturing the Past for Posterity

Monuments and lighthouses are marked and dated. The Nantucket Central Railroad is illustrated, with its dates of operation (1881 - 1917). The railroad’s sole engine, Dionis, is named. (The whole railway was torn up and sent to France to aid the Allies in World War I.) A horse-drawn rail carriage running between Nantucket Town and the Bathing Beach is given its dates (1890-1892). Fish and waterfowl appear in the surrounding waters, and flowers characteristic to different parts of the island are pictured and named, along with forests and cranberry bogs.

A detailed inset plan of Nantucket Town occupies most of the upper left quadrant, naming the streets and important structures, many of which are numbered and keyed to a list included within the right border. Buildings are illustrated pictorially, capturing the character of the town’s architecture but also giving an impression of tree-lined streets and generous lawns.

The pictorial border again emphasizes Nantucket’s history, with pictures of literary and historical events in addition to lists of businesses and hotels. A historical timeline reaching back to the first possible European sightings of the island is appended as well. The title is inscribed on an unfurled banner borne by an eagle in flight, lending a patriotic note to the composition. An illustration of the carved stern of the Edgartown whaling ship Eunice H. Adams appears in the lower center. Ships and ships’ figureheads decorate the corners (puzzlingly, one of these is a Viking longship, though there is here appended no date).

Sutton composed and painted this map in 1946, to be printed by George C. Miller that year. This first edition, which we find cataloged only in the University of Connecticut, the University of Illinois, and Stanford University Library, was printed both in two sizes, 22 x 31 inches and 19.25 x 25.5 inches. In 1964, a second edition was printed under the ‘George C. Miller and Son, Inc.’ imprint, only in the larger iteration. This second edition (present example) is not cataloged in OCLC. Miller’s Son, Burr, would go on to produce a third edition of the map in 1980, again reproducing only the larger format of the map. All three editions are scarce to the market.

Ruth Haviland Sutton (September 10, 1898 - November 23, 1960) was an American printmaker, pastel portraitist, and oil painter. She was born in Springfield, Massachusetts and began her training as an artist at Philadelphia's Pennsylvania Museum and School of the Arts starting in 1924. (That year would also see her first visit to Nantucket, where she visited in order to study with Frank S. Chase, under whose tutelage she became an accomplished painter.) She also studied at Grand Central School of Art in New York City, and with Jerry Farnsworth in Florida. She studied printmaking with George C. Miller in New York and attended the Art Students League in New York City to learn drawing and anatomy from George Bridgman and sculpture from Mahonri Young. As a working, professional artist, she received commissions in the 1930s from the Works Progress Administration to paint murals at the Museum of Natural History in her hometown - before she relocated permanently to Nantucket. There, she applied her lithographic skills to decorative prints of Nantucket scenes, which she published and sold as a series of printed postcards. Her work also included a famous pictorial map of Nantucket and a montage of Nantucket attractions. Sutton was a founding member of The Boston Printmakers and was active in the Springfield Artists Guild and the Springfield Art League. She became one of the most active artists, and ardent promoters, of the Nantucket Art Colony, and shared her success with other artists by purchasing, refurbishing, and affordably renting four waterfront properties to artists. She died - in Nantucket - on November 23, 1960. Learn More...