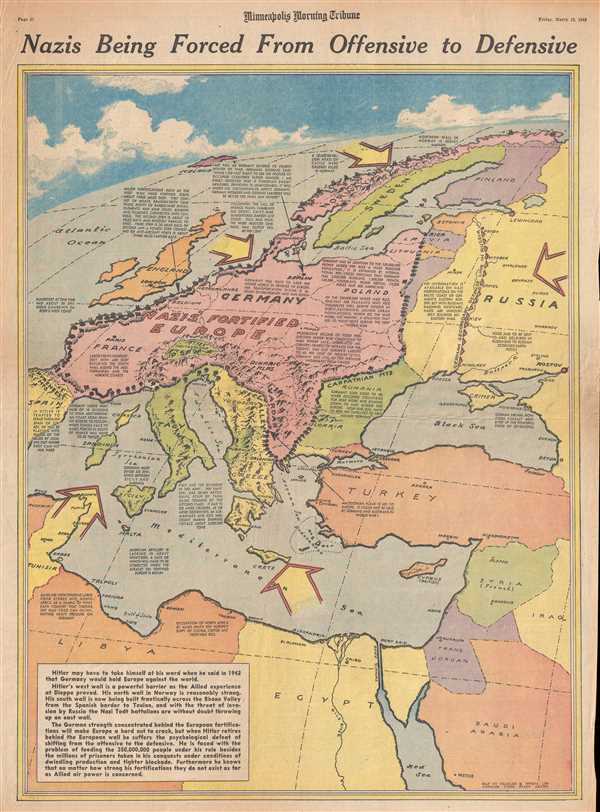 Two months before the Allied victory in North Africa, thoughts of invading Europe are still on everyone's mind.

This is a Friday, March 19, 1943 Charles Hamilton Owens and Minneapolis Morning Tribune map of 'Fortress Europe'. The map depicts the region from Spain and Algeria to Scandinavia, Russia, Turkey, and the Middle East and from the Arctic Ocean to North Africa. With victory in North Africa still two months away, here Owens turns his eye toward the next major problem confronting the Allies in the fight to defeat the Axis powers in Europe: how to invade a fortified continent. With fortifications built along essentially the entire perimeter of Nazi occupied Europe, no clear answer to that conundrum appeared to present itself. In March 1943, the Allied powers launched a misinformation campaign, aided by false intelligence papers which fell into the hands of a German agent, that the next major invasion would come in the Balkans. Even so, there were at least four other possible invasion points that Hitler and other Nazi leaders had to concern themselves with, meaning that they were unable to concentrate their forces in any one location, particularly on the Eastern Front.

As Owens notes in several captions on this map, the Axis also had to contend with and Allied blockade (which may be a little strong, considering the strength of German U-boats in the Atlantic). However, with war raging in North Africa, provisions from that part of the world were no longer readily available to a 'besieged' Europe. Privations and shortages were a major factor in ending World War I, a fact to which Owens alludes here, and perhaps is implicitly stating could be a factor in the current war as well. In the final sentence of the text box located in the lower left corner, Owens states, 'no matter how strong his [Hitler's] fortifications they do not exist as far as Allied air power is concerned.' Even with the horrors and violence unleashed from the sky by Allied bombers and their aircrews, bombing a city, in the end, does not liberate it. Even if the fortifications 'will make Europe a hard nut to crack', nothing could be done to avoid an invasion.

When Charles Hamilton Owens drew this map, he was doubtless inspired by the work of Richard Edes Harrison, an American illustrator and cartographer who, working for Fortune magazine, pioneered a new style of representing the world for WWII era propaganda maps. Edes developed the convention of using spherical perspective with an exaggerated vertical dimension, as on the present map, to illustrate part of the world as part of a greater global situation. This map was drawn by Charles Hamilton Owens and published in the Minneapolis Morning Tribune on Friday, March 19, 1943.