1793 Wilkinson Map of Holland or the Netherlands, Belgium and Luxembourg 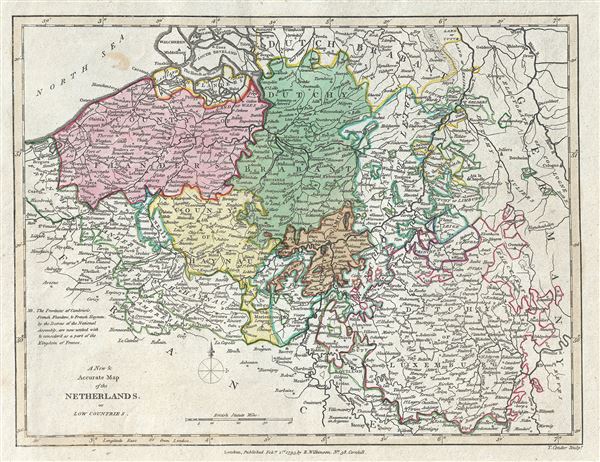 1793 Wilkinson Map of Holland or the Netherlands, Belgium and Luxembourg

This is Robert Wilkinson's lovely 1793 map depicting the area now covered by the southern Netherlands, Belgium and Luxembourg. It covers from Breda, south as far as Montmedy and from Dunkirk east as far as Cologne. When Wilkinson prepared this map, much of this region was dominated by the Hapsburgs of Austria.

The Low Countries were on the low-lying delta formed by the convergence of the Rhine, Scheldt, and Meuse rivers. This portion of the Netherlands was known successively as the Habsburg Netherlands, the Spanish Netherlands, and the Austrian Netherlands, until, a year after this map was made, Napoleonic forces invaded and set up a new French client state, the Batavian Republic. The Low Countries, until 1581 part of the Seventeen United Provinces, were reunited by the 1815 Congress of Vienna as the United Kingdom of the Netherlands. Along with the United Provinces, this area, which hosted the world's first stock exchanges, is considered the birthplace of the modern capitalist economy.

A great companion map to Wilkinson's 1794 map of the Seven United Provinces to the north, from the same atlas. This map was engraved by Thomas Conder and issued as plate no. 14 in the 1792 edition of Robert Wilkinson's General Atlas.