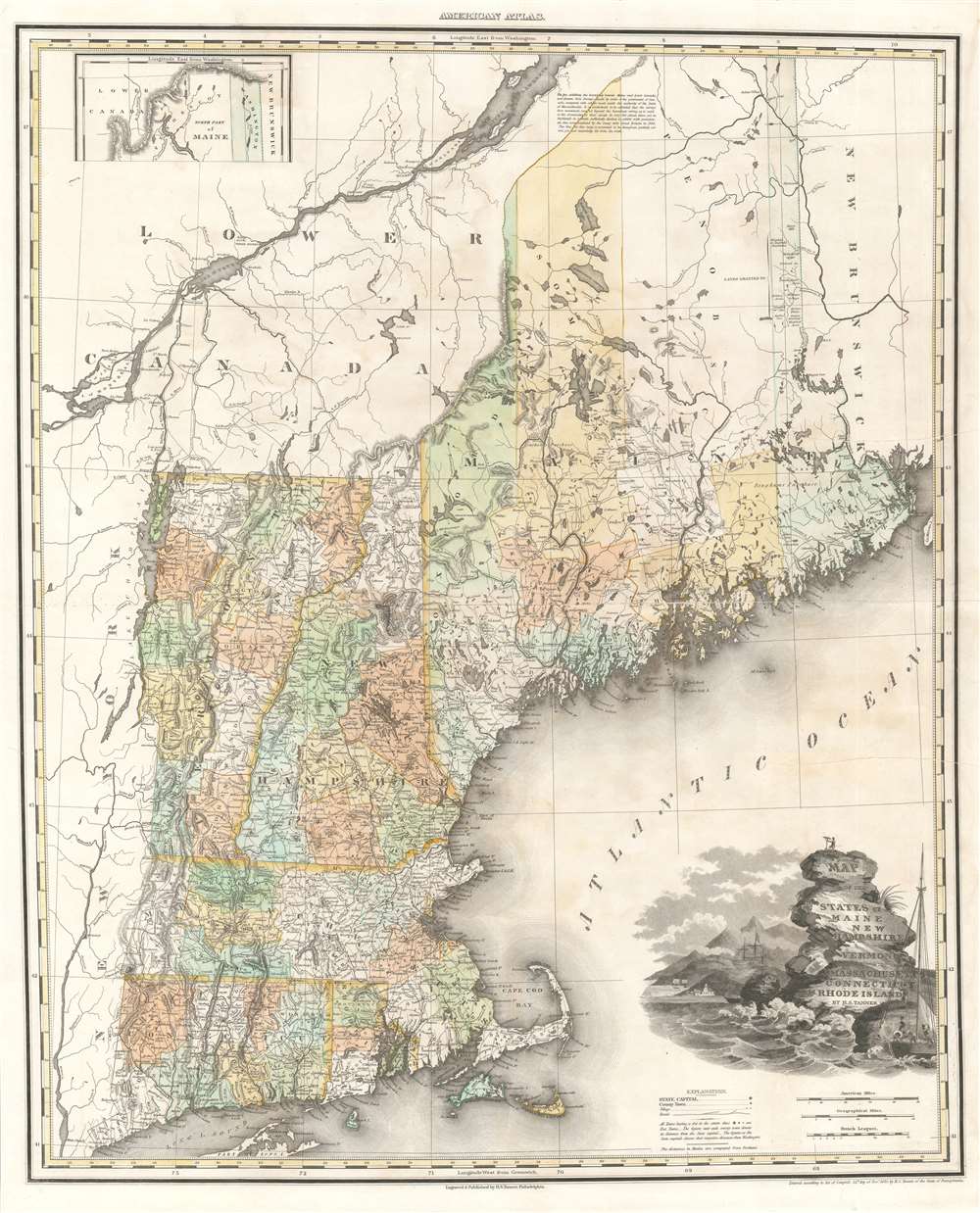 A landmark map of New England.

This is an 1825 Henry S. Tanner map of New England. The map depicts the states of Connecticut, Massachusetts, Rhode Island, Maine, Vermont, and New Hampshire. The map is cartographically most interesting in Maine, where it exhibits a primitive county structure. There is a stunning decorative vignette in the lower right containing the map's title, as well as an illustration of a surveyor on top of a rocky outcrop. In the foreground fisherman work the cod fisheries while a larger sailing vessel is being repaired in the background.

This is wonderful map which commonly retails for between 1800 - 2500 USD. The present example is offered at a fraction of the usual retail price due to condition issues. The map is has a repaired centerfold spit, some buckling, and 6 inch tear from the right margin apparent just above the cartouche. Nonetheless, it presents beautifully and remains a striking decorative piece. The impressive detail and accuracy present in all the maps published by Tanner in his New American Atlas are easily read and appreciated.

This map was originally engraved for Tanner's monumental New American Atlas, issued between 1819 and 1823. The present example is from the revised edition of the atlas published in 1825. The New American Atlas is considered to be the apex achievement of what Ristow refers to as the 'Golden Age of American Map Publishing.' Each map from the New American Atlas is a finely engraved masterpiece featuring the most up to date cartographic information as well as elaborate thematic cartouche work and delicate colorwork. All maps from this series are highly desirable and have become extremely scarce - the present example being no exception.

Tanner, H. S. New American Atlas, (Philadelphia) 1825.     Tanner's New American Atlas is regarding as the largest and most beautiful early American atlas, truly a landmark achievement from the Golden Age of American Cartography. The atlas was initially published in five parts between 1819 and 1823, after which collected editions were issued in 1823, 1825, 1833, and 1839. It terms of size, format, printing quality, paper quality, cartographic accuracy, and elegance of engraving, the New American Atlas was unparalleled. As noted by map historian Walter Ristow, 'Tanner's atlas raised U.S. commercial map production to a new level of excellence.' His contemporaries were also duly impressed. The American educator and historian Jared Sparks, as quoted by Ristow, describes the atlas as thus: