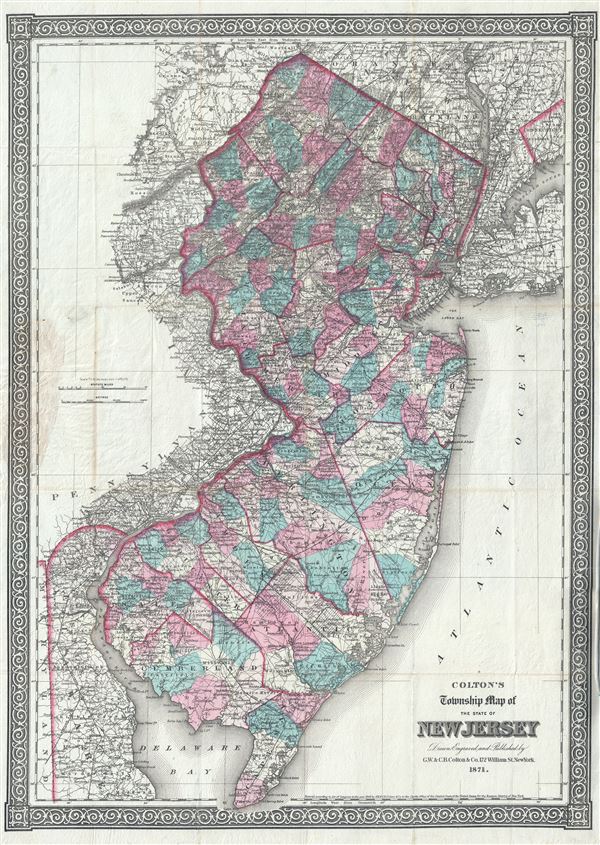 This is Colton's exquisite hand colored and highly detailed 1871 pocket map of New Jersey. It depicts the whole of the state and surrounding areas in splendid detail with particular attention to roads, cities, railroads, rivers and a host of additional topographical features. The map details the state of New Jersey with color coding to define the counties. The Delaware Bay and parts of New York and Pennsylvania are included. The map is dated 1871 in the title, but is copyrighted in 1868, when it was first issued. It represents a major update upon the earlier Colton map of New Jersey which had not been significantly updated since 1855, and reflects the 1871 county and township structure. Dated and copyrighted, 'Entered according to Act of Congress in the year 1868 by G. W. & C. B. Colton & Co in the Clerks Office of the District Court of the United States for the Eastern District of New York.'

Very good. Minor wear and toning along original fold lines. Some toning and spotting near left margin, where map was attached to binder. Accompanied by original binder. Professionally flattened and backed with archival tissue.
Looking for a high-resolution scan of this?