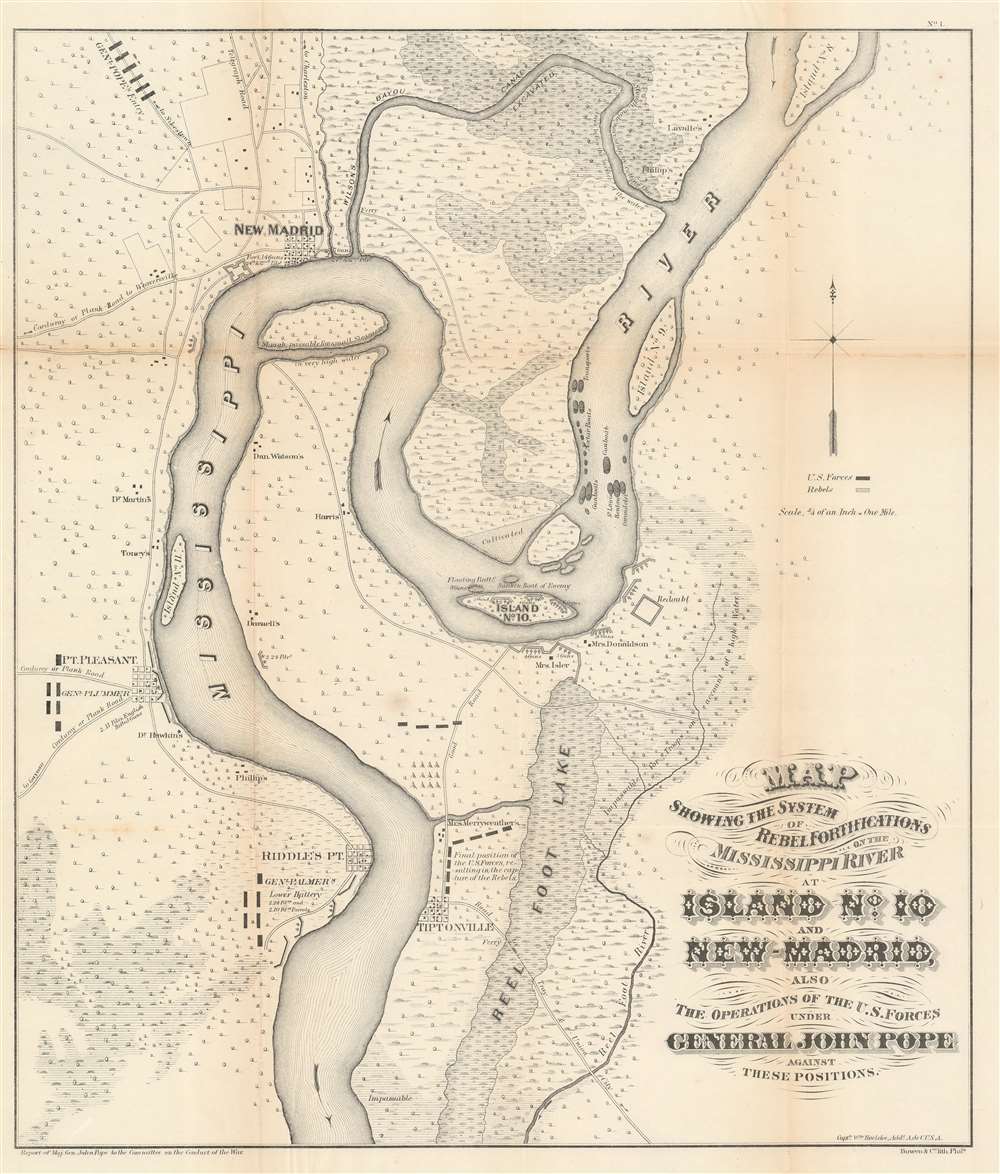 A scarce and important 1862 Civil War map illustrating the course of the Mississippi River in the vicinity of New Madrid, Point Pleasant, Riddles Point, and Tiptonville. This region, collectively known as the Kentucky Bend, is situated at the meeting point of Missouri, Kentucky, and Tennessee. The map was prepared by Major General John Pope, a Union Commander, to illustrate his decisive siege and take over the strategically situated and heavily fortified Island No. 10. Located just upriver from New Madrid, Island No. 10 is situated at a sharp northward curve in the Mississippi. The Confederate Army fortified the island realizing that, if they could control Island No. 10, they could effectively prevent Union forces from using the Mississippi as gateway to the Deep South.

General John Pope (March 16, 1822 - September 23, 1892) was the commander of Union Forces in the region. As former surveyor and member of the Army Corps of Engineers, Pope came up with an unusual solution. While distracting the Confederate Army with his troops positioned around Point Pleasant, he sent another part of his army northward to New Madrid, which the Confederacy had recently abandoned in favor of the more defensible position at Island No. 10. He had the New Madrid contingent of his forces excavate a wide canal through the Bayous east of New Madrid to reconnect with the Mississippi between Island Nos. 8 and 9. By passing transports and gunboats through the canal, Pope not only limited the strategic importance of Island No. 10, but also positioned troops on both the Missouri and Kentucky side of the river, thus surrounding the island and effectively cutting off its single supply line.

This map was laid down by William Hoelcke, a Union Officer and Chief engineer of the Department of the Missouri, on the instruction of the victorious Union commander, Major General John Pope. The map is derived from various sources, including Coast Survey preliminary studies, original survey work commanded by Pope, and earlier street plans of New Madrid, Point Pleasant, Riddles Point and Tiptonville. This map was published for the Report of Major General John Pope to the Committee on the Conduct of the War. It is considered a cardinal piece for collections focused on the early days of the American Civil War and the Mississippi River theater. The present example is identifiable as an exceptionally early edition by the use of the term 'Rebel' in the title, as subsequent editions substituted the term 'Confederate.' Later variants of this map appear in several subsequent publications, including the Civil War Atlas. We note five examples cataloged in OCLC: New York Historical Society Library, the Library of Congress, Pennsylvania State University, the David Rumsey Map Center at Stanford University, and the Birmingham Public Library in Birmingham, Alabama.