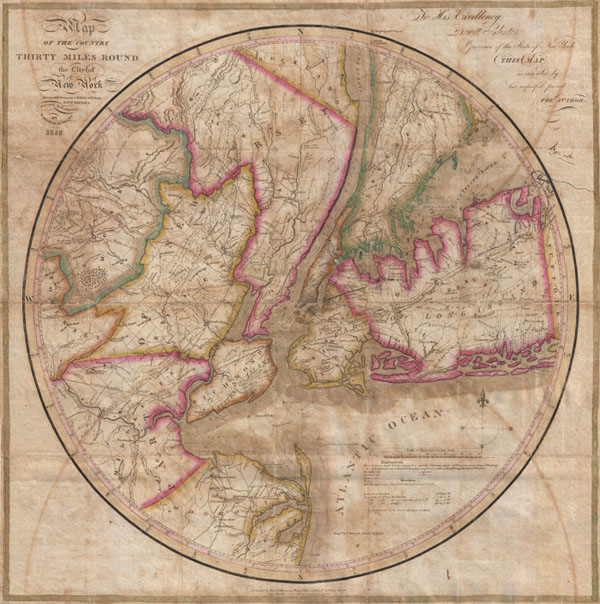 The Eddy Map.' One of the most important early maps of New York City ever printed.

Known as 'The Eddy Map,' this is an extremely rare and important circular map of New York City and vicinity, dated 1823. Covers the New York City area in roughly a thirty mile radius of Manhattan, extending north to Tarrytown, south to Monmouth, west to Somerset, and east to Suffolk County. Isaac Stokes, in his 1928 classic on the iconography of Manhattan, calls this map 'one of the most complete, accurate, and beautiful early engraved maps showing New York and its environs.' It is also recorded that Thomas Jefferson kept a copy of this map in his personal library.

This is the second edition of the Eddy map, published in guide format in 1828 by Hooker and Blunt. The first edition was published in 1811. Subsequent revised editions were released in 1836, 1839 and 1842. In 1846 J.H. Colton acquired the plates and significantly redesigned and re-engraved the plan adding contemporary urban detail, dropping out family names, and incorporating a large decorative border. Between the first (1811) and second (1828) editions, both of which were engraved by Peter Maverick, there are a number of minor revisions. Manhattan has been adjusted to reflect street grid developed for the 1811 Commissioners Plan and several family names, mostly in Manhattan, Queens, and Staten Island, have been altered.

An elaborate dedication in the upper right hand corner reads, 'To His Excellency Dewitt Clinton Governor of the State of New York. This map is inscribed by his respectful friend, the Author.' Dewitt Clinton was the sixth governor of New York State and sponsored many of the most important early mappings of the state. He died in 1828, the same year this map was published - though the dedication was also present in the 1811 edition. Subsequent editions of this map removed the dedication.

This map was originally owned by the Embree family of Long Island. This prominent New York family immigrated to the United States in 1644 and most records associate them with Huntington Long Island and Flushing Queens. Numerous members of the family are known to have been prominent lawyers and industrialists. Elihu Embree, of the most prominent members of the well to do family lobbied strongly against slavery and published an important anti-slavery newsletter titled The Emancipator.

While all editions of this map are, for all intent and purposes, unobtainable, the first and second are the most highly regarded. There are several important examples of this map in major collections, including the New York Public Library, the Library of Congress, and the Rumsey Collection. However we have been unable to identify a single example of this map to appear on the open market in the last 40 years. Exceedingly scarce - a once in lifetime opportunity.

John H. Eddy (1784 - December 22, 1817) was an important yet tragic figure in New York cartography during the early 19th century. Eddy referred to himself as a 'Geographer' and is responsible for drafting a number of important maps of New York, including the most accurate mappings in his day of western New York and of the vicinity of New York City. Little is known of Eddy's early life. Eddy was raised in New York and educated in public schools until, before graduating, he contracted scarlet fever. The illness rendered him deaf and unable to continue on a traditional educational path. Instead Eddy dedicated himself to studies of cartography, mathematics, and drafting, fostering friendships and maintaining an active correspondences with leading figures in these fields. Around this time he also developed an abiding love of the outdoors. Eddy published his first maps in 1811 and 1812. These included his important map of Western New York as well as a highly detailed map of the area 30 miles around New York, known today as "The Eddy Map". Impressed with his work, New York Governor Dewitt Clinton commissioned him to compile several important maps of the Erie Canal and the Niagara River as well as a large format map of New York State. Eddy finished compiling this work in 1817 shortly before his mysterious and sudden December 22 death. Eddy's last map was published posthumously in 1818. At the time Eddy is also known to have been in the process of compiling an America atlas in association with Tanner, Vallance, Kearny and Co. of Philadelphia. Learn More...


Edmund March Blunt (June 20, 1770 - 1862) was an American navigator, bookseller, chartmaker, and cartographer based in Newburyport, Massachusetts. Blunt was born in Portsmouth, New Hampshire in 1770. In 1796, along with the nominal assistance of prominent navigator Captain Lawrence Furlong, Blunt published The American Coast Pilot, one of the most important published works on American navigation. Although much of the work was plagiarized from British publications, the Coast Pilot was an immediate popular success. In response to the popularity of his work, Blunt published 21 subsequent editions, each with important updates and revisions. The first edition to contain map plates was printed in 1804. Following a fire that destroyed his offices at The Sign of the Bible in 1811, Blunt moved his business to New York and opened a new shop, The Sign of the Quadrant. In time, his sons Edmond Jr. (1799 - 1866) and George William (1802 - 1878), took over the family business, and renamed the firm 'E. and G. W. Blunt'. They both produced their own nautical books, charts, and instruments, as well as republished their father’s work. In 1830, Edmund accepted a position under Ferdinand Hassler at the United States Office of the Coast Survey. Much of Blunt's original work eventually found its way into U.S. Coast Survey Publications. Due to the quality and detail of Blunt's work, revised editions of his most important charts were republished well into the 1880s. Learn More...


William Hooker (fl. c. 1811 - 1846) was an important American geographer, surveyor, and engraver active in New York during the early part of the 19th century. He is responsible for a number of important maps and geographies particularly focusing on the New York area. As a young man, Hooker may have been apprenticed to Edmund March Blunt, the well established publisher of the New England Coast Pilot. What is certain, is that in 1819, Hooker married Eliza Carleton, Blunt's daughter. He went on to publish a number of nautical charts, school geographies, guide books, and atlases in conjunction with Blunt and others, including Humphrey Phelps, Peabody & Company, and A. W. Wilgus. Hooker passed away in 1846. Learn More...