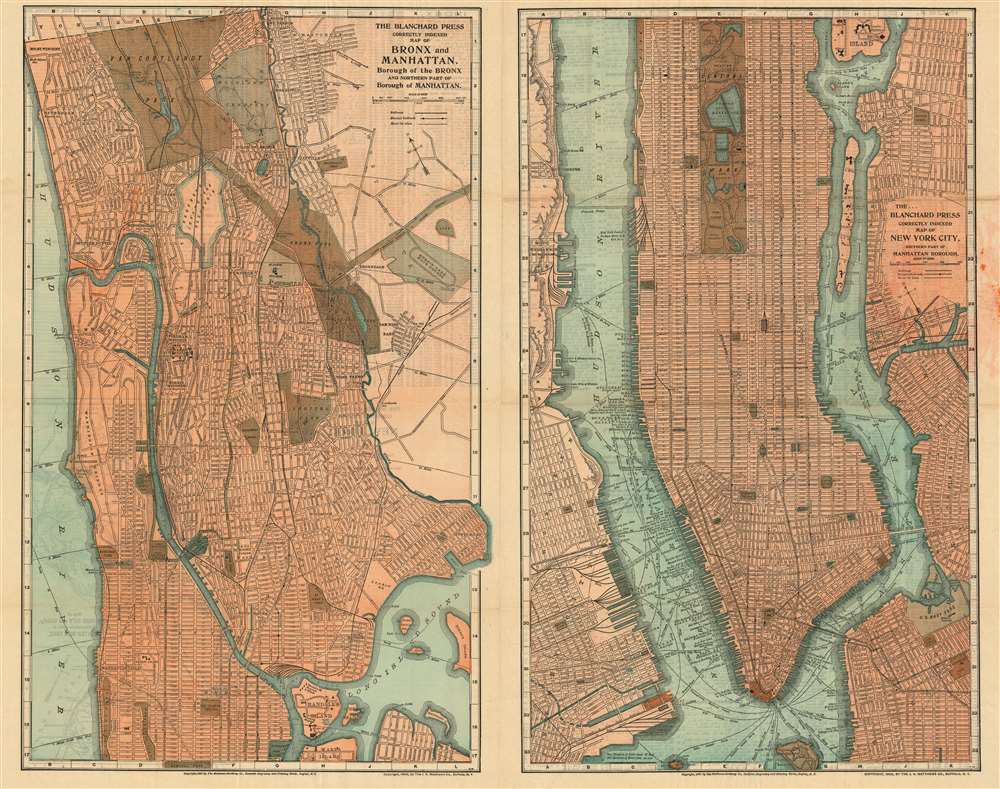 A Richly Detailed Map of Manhattan and the Bronx: One of the First to Show the Bronx Zoo
$850.00

This is a rare 1895 Map of Manhattan and the Bronx printed by J. N. Matthews for the Blanchard Press. This is one of the first maps to focus on Northern Manhattan and the Bronx, reflective of the spread not only of the city's population but also the increase of public works there. The map shows Van Cortland Park (first set aside as parkland in 1888) and the Morris Park Race Track (site of the Belmont Stakes between 1890 and 1904 and the Preakness in 1890.) The newly-founded Bronx Zoo is shown as well, although it would not open until 1899.

Although the earlier of this map's copyrights is 1895, we have not identified an example published before the latter copyright of 1902. Matthews-Northrup appears to have produced this map for publication by a variety of houses. In addition to Blanchard Press, we see comparable examples printed in 1904 by Home Life Publishing Company and by Foster and Reynolds; examples for Trow's Directory of 1909 can be found. This earliest edition, produced for Blanchard, appears to be quite rare. OCLC shows one example at the University of Oxford. We see no examples in dealers' catalogues or auction records.


Isaac H. Blanchard (1862-1931) was an American printer and founder of Blanchard Press in New York City. Blanchard’s maps focused mainly on New York City and neighboring regions, though he also produced a map of Washington D.C. The press also printed books, specializing in historical themed works such as ‘Elizabeth Schuyler: a story of old New York,’ ‘Lady Hancock : a story of the American Revolution.’ Learn More...