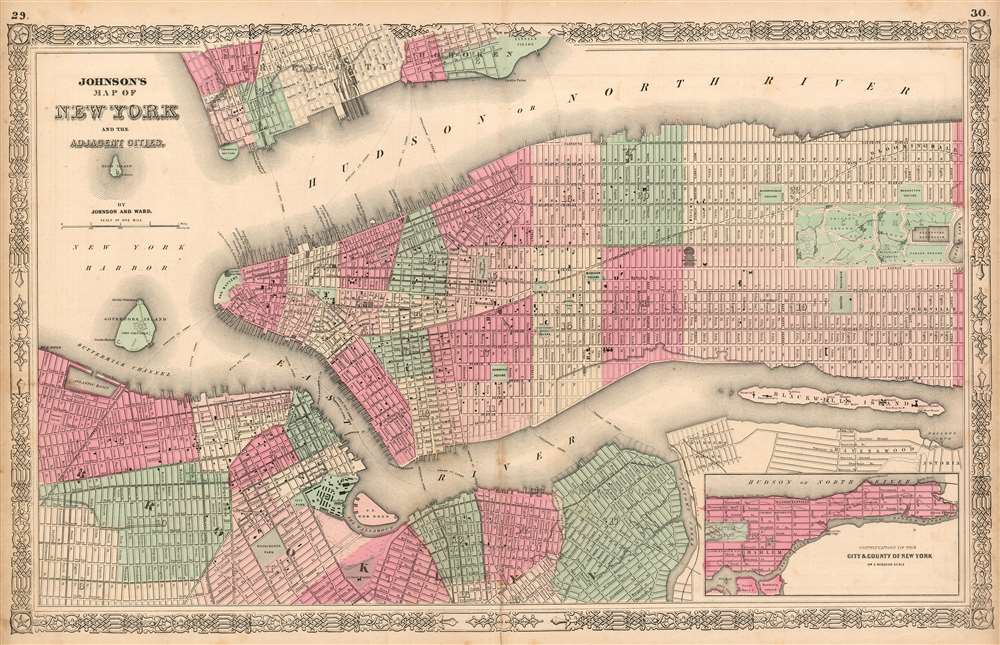 This is Johnson and Ward's 1865 map of New York City. This lithograph map covers the island of Manhattan and the borough of Brooklyn as well as parts of Jersey City and Hoboken. The map reaches as far north as Eighty eighth street in Manhattan; an inset in the lower right shows the remainder of the island 'on a reduced scale.' The city's wards are numbered, and distinguished from each other with hand color. The map shows the city's grid in detail, including areas of planned landfill in both Manhattan and Brooklyn. The Hudson and the East River are spanned by ferries, which are marked and named. With the exception of the newly built Long Island Railroad (its Hunter's Point terminus is visible) no railways yet appear in New York. A burgeoning terminal can be seen in Jersey City, however.

The map highlights many of the city's green spaces, which were a sharply-needed antidote to the city's boom in population density that began with the opening of the Erie Canal. City Hall Park, Tompkins Square, Washington Square, Union Square, Stuyvesant, Manhattan and Madison Square are all shown. Hamilton Square, long a neighborhood in the vicinity of Park Avenue and 66th Street, is shown. By the time this map was produced, however, the plot had been subdivided and sold in the wake of the recent creation of Central Park. The map also includes Bloomingdale Square, from 53rd to 57th Streets between Eighth and Ninth Avenues. Though this was included in the 1811 Commissioners' plan and appeared on many maps, it was actually never executed and was struck from the plan in 1857, also in deference to the newly-created Central Park only two blocks north of it. Central Park itself is shown in great detail in its earlier incarnation, with the receiving Reservoir in the place of today’s Great Lawn. In Brooklyn, Washington Park (Now Fort Greene Park) can be seen. Prospect Park was not yet proposed, and in any case would eventually appear outside the bounds of the present map.

Throughout the map can be seen hospitals, fortifications and batteries; the Brooklyn Navy Yard is shown in detail. New York's long standing effort to keep its unfortunates at arm's length is evident in the details of Blackwell's Island. Later known as Welfare Island (and now known as Roosevelt Island,) it is shown to be home to a hospital, a penitentiary, men's and women's alms houses, and a work house. A large lunatic asylum neighbors both the 'New mad house' and the 'old mad house.'