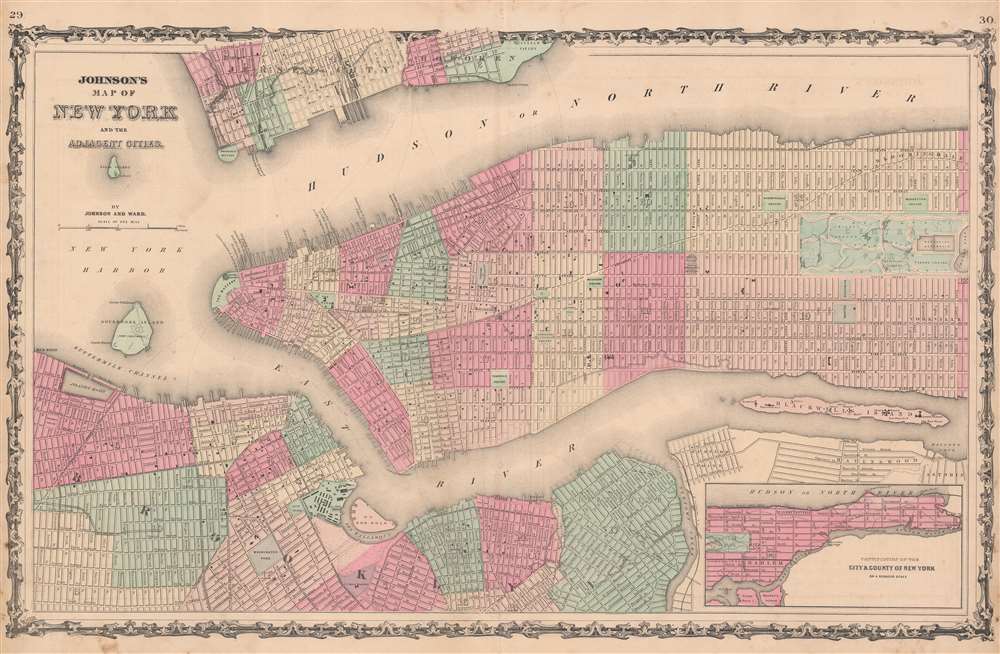 This is an 1863 Johnson and Ward city plan or map of New York City and Brooklyn, here in its first state. The map depicts the island of Manhattan and the borough of Brooklyn as well as parts of Jersey City and Hoboken. Central Park is shown in an earlier incarnation than we know today with the lakes in the southern portion of the park being somewhat vaguely displayed. In the central part of the Park, we find the Old Reservoir which is today's Great Lawn. The important ferries running between New York, the boroughs, and New Jersey, are all noted. In Queens we can see the newly built Long Island Railroad leaving Flushing station. At the tip of Roosevelt Island where now stands a decrepit ruin, there is a war hospital. The whole features the strapwork style border used by Johnson in his atlases between 1860 and 1863.

Prior editions of the Johnson atlas (1860 and 1861), including the Johnson and Browning editions, did not contain a New York City plan. It was first issued in 1862 and remained unchanged in the 1863 edition. This particular map was most likely based upon the third state of the Colton New York City map. Published by A. J. Johnson and Ward as plate nos. 29-30 in the scarce 1863 edition of Johnson's Family Atlas. This is the second edition of Johnson's atlas to bear the 'Johnson and Ward' imprint.