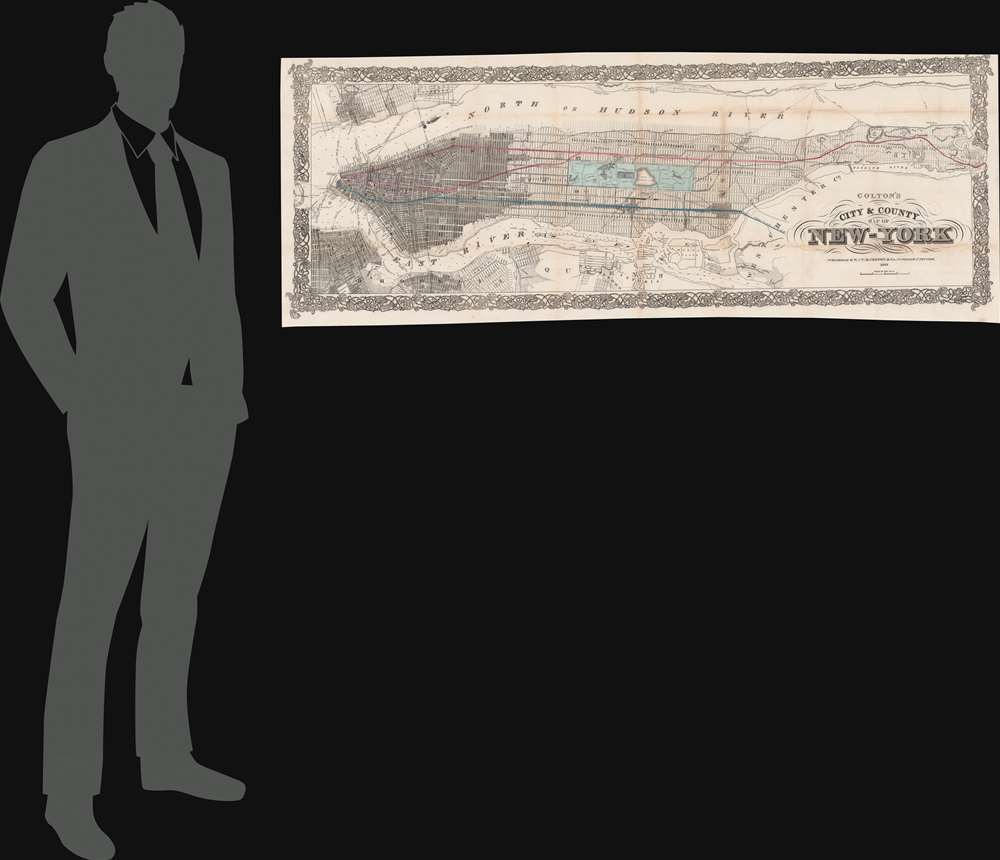 This is Colton's impressive 1867 map of Manhattan representing the birth of public rapid transit in New York. The map is oriented loosely to the east, with coverage embracing all of Manhattan, as well as adjacent parts of Brooklyn, Queens, Hoboken, and Jersey City. Central Park - a wonder of civic design being completed as this map went to press - features prominently at center. Significantly, the map reveals proposed elevated railroads highlighted in blue and red running from the Battery to the Harlem River - thus making this the first map to show the planning stages of public transit in New York, the precursor to the modern-day Subway.

By the mid-19th century New York City had become one of the fasting growing metropolitan areas in the world. Being a long narrow island, New York had geographical limitations preventing urban sprawl, and so, commercial, residential, and business activity focused on lower Manhattan - here shaded to represent development. Much of central and northern Manhattan, although grided for development from 1811, remained remote, uninhabited, and inaccessible. Thus, in lower Manhattan, industrial activity, port life, and overpopulation led to dense slums - such as the infamous Five Points -, disease, and general sanitary degradation.

Recognizing the problem, the Common Council financed a series of revolutionary urban improvements that transformed New York. These include the 1864 Egbert Viele Waterways Map, the construction of the Croton Aqueduct, and the 1858 - 1868 commissioning of Central Park. Another such innovation was the recognition of a need for a rapid public transportation system in the spirt of the London Underground, the vision being that the working-class populace could live in cheaper properties in upper Manhattan and Westchester while commuting quickly and easily to the downtown business district.

Several plans for a rapid transit system were put forward, including an underground system similar to London, a mid-block overland train, and an elevated system. The development of an underground system was dismissed as too expensive and impractical for New York, the mid-block system was derailed as it would have involved levelling numerous significant properties, but plans for an elevated railway were approved by the Common Council in 1866.

The approval first demanded that a 'test route' be constructed from Battery Place extending northward for one half mile along Greenwich. This, completed about six months later, was New York's first public rapid transit system. Although plagued by mismanagement and construction issues, the experiment was declared a success and construction moved forward on the planned lines - as noted on the map.

The West Side and Yonkers Patent Railway Company received permission to construct a railroad from the Battery along Greenwich Street to 9th Avenue (Columbus), from which point it was to proceed north to 147th street, after which it followed Kingsbridge Road (Broadway) to the Harlem River Bridge, hence into the Bronx and Yonkers. This is the proposed red line appearing on our map and roughly corresponds to the 1/2/3 Subway line today.

The East Side and New Rochelle Patent Railway Company received permission to construct an elevated railroad from Battery Park along Pearl Street to Bowery, and thence northward from Astor Place along 3rd avenue to the Harlem River Bridge, and thence into Westchester. This is the blue line presented here, and roughly corresponds to the modern day 4/5/6 Subway lines.

In 1876 these companies were consolidated into the New York Elevated Railroad. It took to about 1880 for the lines to reach their terminus at the Harlem River, but both did. In 1878 alone the NYERR carried more than 14,000,000 passengers - marking it as an enormous success. In 1909, the system was leased to the Interborough Rapid Transit Company (IRT) for an astounding 999 years. The IRT eventually merged with other lines to become the modern MTA.

This map was issued by J. H. Colton for inclusion in Exposé of the Facts Concerning the Proposed Elevated Patent Railway Enterprise in the City of New York. 1866. It is rare, and although there may be an example at the New York Public Library containing the map (unconfirmed). The rarity of this piece is underscored by the fact that it does not appear in Haskell. We do note a separate issue example of this map in the Harvard Library, but that example lacks the train data and is thus likely a different issue. Unique to the market.

Exposé of the Facts Concerning the Proposed Elevated Patent Railway Enterprise in the City of New York. 1866 (New York) 1866.